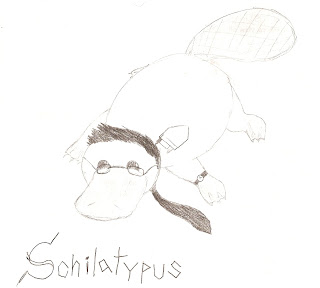 Last week I heard another conversation coming from the nether regions of my classroom. All I heard was, "....BYU t-shirt...." and I said, "What did you say about BYU?" I worked my way over to the group of students that I had overheard and they promised that they were behaving. I let them continue what they were doing and a few minutes later they unveiled the Schilatypus. The conversation I had overheard was them discussing if the Schilatypus should wear a BYU t-shirt. The students were pretty pleased with their creation and are hoping to make an entire Schilaty zoo that could include such animals the Schiliger and the Schiloctypus.
Posted by Ben at 7:53 PM

Hilarious! I can't wait to see the other animals.