I don’t have a picture of Ana Margarida yet, but I’ll post one when I get one. She’s my teacher and she’s so awesome. One of the requirements of the scholarship from the Department of Education that I got was that I attend 140 hours of language classes this summer. The program I’m attending is only 80 hours long and begins in July. To complete the 140 hours requirement I arranged to take 60 hours of private lessons from the university. The university charges 27 euros an hour for the lessons which is far more than a normal person would ever want to pay, but the Department of Education agreed to pay it.

While I was worried about finding a place to live in Portugal and not being able to talk to people, the thing that worried me the most was spending 60 hours one on one with someone that I didn’t like. When I first met Ana Margarida I was immediately put at ease. Not only is she kind and funny, but she is a fantastic language teacher. I know lots of language teachers and I would say that she’s just as good as a Leigh Cherry or a Rob Martinsen which is really saying something. We do a lot of different activities to break up the day and it’s a blast. We start out every class with me telling her what I did the previous day and asking questions about things that I didn’t understand. Like, “Is it normal for my landlady’s mom to do my laundry?” or, “My waiter didn’t bring me my check for 40 minutes. What’s up with that?” We usually end up chatting and laughing for the first 30 minutes of class before we get to any real work.

On the first day of class I was a little jetlagged and started to get really tired after three hours of class. She asked me if I wanted to end early and I did. I said, “I’m sorry, but five hours is just such a long time,” and she said simply, “Yes it is.” The next day I told her how relieved I was when I met her because she was so fun and such a good teacher. She confessed that she was relieved when she met me, too. You see, she didn’t realize that I had a scholarship that was paying for the private lessons. She thought I was some uppity American that was willing to pay 27 euros an hour for private lessons and she was worried that I would complain if we didn’t have five hours of perfect language instruction. She was incredibly relieved to learn that I didn’t want to be there for five hours either and that I was just filling a requirement and we’re both glad to have a laidback atmosphere. So since we have to be together for five hours a day, we’re going to start sightseeing together next week and I’m super-pumped. I’m so glad she’s my teacher.

I really enjoy how we just chat in Portuguese every day. I’ve shown her pictures of my family and she’s shown me pictures of hers. On the second day of class we were talking about how I learned Spanish and I told her that I was a missionary in Mexico. She was surprised to learn I was Mormon because she thought Mormons lived in isolated communities without electricity and wore bonnets. She’d never met a Mormon before and didn’t even know that there were Mormons in Portugal. She asked me what the Book of Mormon was and, in Portuguese, I explained how it was written during the same time as the Bible, but in the Americas, how it was written on gold paper, how Moroni buried it in the ground and Joseph Smith took it out of the ground and rewrote it in English (those are the actual words I used because I didn’t know words like “plates” and “translate”). My vocabulary was really limited and it took so much effort to say it. Ana could tell that it had been difficult for me to explain everything in Portuguese and when I was finished we looked at each other and in unison we each took a deep breath and leaned back into our chairs.

Reflecting on this experience, I realized just how long it’s been since I’ve told someone about the Book of Mormon and how much I miss doing that. And I left out so many important details like Christ’s visit to the America’s and the First Vision and just the fact that the Book of Mormon has changed my life. I’ve spent the last two years at BYU where I go most days without ever even seeing someone who isn’t LDS. And now here I am, on the other side of the world, and my only friend is someone who’s never met a Mormon before. I’m glad to be here and I’m glad to be in a place where I’m reminded that I don’t live my religion just because everyone else is, but because I want to. I hope I get the opportunity to explain to Ana the important parts that I left out of the Book of Mormon because I didn’t do the book justice. And I also want to explain the Joseph Smith story because if she’s heard of Joseph Smith, she’s probably just heard a lot of incorrect and negative information. As much as I love the safety of BYU, I love being able to teach people, too and I’ve missed that.

Here’s a story that I had to write for class. I had to use some vocabulary words (try and guess which ones). And, of course, the original version is in Portuguese. As I read the story to Ana there were a few times that we were laughing so hard that I had to stop reading. That’s how we spend most of class—laughing.

Once upon a time a girl wanted to be the Queen of Spain. The problem was that she was from Portugal so she couldn’t be the Queen of Spain unless she married the Prince of Spain. She didn’t like him very much because he was ugly and a bookworm. But she had a goal so it was all good. She went and talked with the Prince and he liked her and asked her to marry him. She thought and realized that he was so ugly that she couldn’t marry him. But she didn’t want to give up on her goal so she said to him, “Wait one minute,” and she went outside. She went looking for a miracle. She found a beehive and asked, “Is there anyone there that can give me a miracle?” but no one responded. Then she ran into an anthill and asked the same question. An ant came out and said to her, “I can grant wishes.” She replied, “Very good, magic ant. I want you to make me blind so that I never have to look at the Prince.” And so it was and she never looked at the Prince again, but she married him and they lived happily ever after.

And lastly, here of some pictures of the places I studied today. Since it was Saturday I went all over the city and read for an hour and then went to a new place. The first picture is my failed attempt to stage a picture. I doubt I'm the first person to forget to set the timer on my camera. 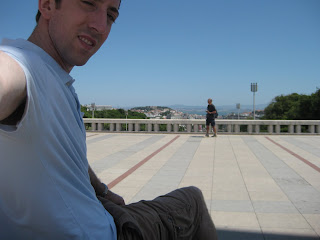 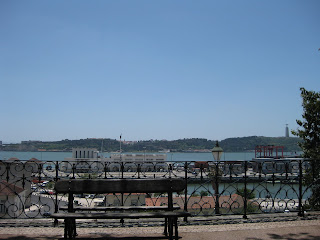 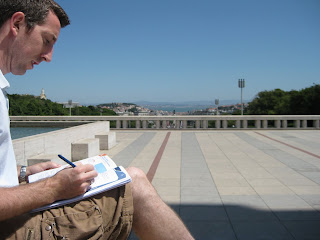 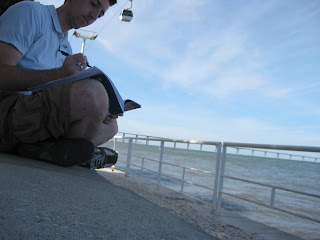 is it normal for your landladys mother to do your laundry? you have me intrigued! love seeing your posts Ben keep them coming!

No, apparently it's pretty atypical. Ana thinks that she's probably just a nice old lady with nothing to do that wants to help out. I'm glad you like my posts, Anonymous.

Woo! Armpit shot! How racy of you! I love your blog posts too, Ben! Makes me miss having you around a little less.