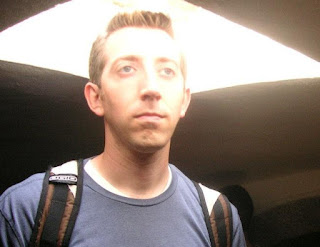 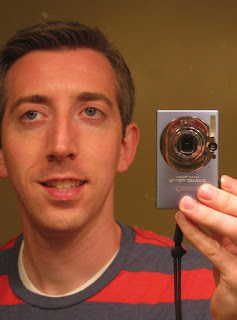 Part it! Parting it is actually pretty contemporary and you should trust your bro and his wife.

I like the part! It makes you look sophisticated. And that's just the look you want for a future Dr. of Philosphy! :)

Why not do both to hit your target market?

Ben. I don't think you've thought about this as much as you should. You say its been teenage girls and 60 year olds, you want to meet in the middle. I'm thinking the new faux mullet-part in the front and spike in the back or vice versa. Or the new Cruella Da Vil-one side parted and the other spiked. Haha, just kidding but those would be some awesome pictures.

I like both but you could try spiking it into the part. Evan used to do that and I loved it. Now he shaves his head and it undoubtedly makes him look older, so steer clear of that.

I like the part! When you described parting your hair I imagined it more flat to your head and that sounded nerdy. But then I scrolled down and saw the picture and I was pleasantly surprised. Speaking as a member of your target age group (albeit a married one), I vote for the part!

Try to attract twentysomethings with your personality. I once dated a girl who was over 20 years old and I'm pretty sure it was my personality rather than my hair.

hey sr.schilaty its one of ur students the one that asked u for a hug and helped u out and was the youngest i think that u should keep ur hair spicky it looks better and the parted doesnt look like u u should mention in ur log that im a nice person and asked u for a hug :)