I’m (hopefully) Less Racist than I Used to Be

As a tall, white, English speaking, educated male with hair, I’m one of the most privileged people on the planet. And I have a lot of blind spots.

Last Thursday I attended a panel on race and immigration at BYU. The keynote address was given by a former professor of mine. She spoke of her experience as a black immigrant from Africa with poignancy and humor. I felt so lucky that I was able to be her student. After her talk she participated on a panel with black, immigrant students.

The panel of black women spoke powerfully and authentically. One of them spoke about living in a refugee camp for years before relocating to the US. I tried to put myself in her shoes and imagine what it would have been like as a teenager to have to flee my home, live in a camp with an uncertain future, and then move to a place where everything was different. Another panelist spoke of being adopted from an African country at the age of three. She grew up in a white family in Provo, UT. I wondered what it would have been like if I had been adopted by a family that didn’t look like me and grow up in a place where few people at all looked like me. Walking in their shoes for a few minutes expanded my heart. 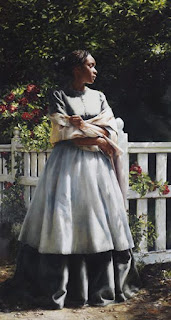 I noticed that one of the panelists described herself as Nigerian-American and I wanted to understand what the nuances were for her of identifying as Nigerian-American and not African-American. When the panel started, everyone in the room was told that we could submit questions via an app. I hadn’t planned on asking any questions, but I was suddenly curious about black identities and self-identification. So I pulled out my phone ready to type my question. Then I saw some of the questions that had already been submitted and I was deeply disturbed.

Most of the questions were respectful and inquisitive, but some of them were insensitive, antagonistic, and just plain racist. I was shocked. The auditorium we were in was not big. There couldn’t have been many more than a hundred people in the room. I knew about fifteen people in the room and I wondered, who on earth wrote these questions? I looked down at my right hand, at the rainbow ring on my ring finger, and I felt exposed. I remembered the LGBT panel I had been on at BYU two years before as a student where we had used the same app and homophobic and transphobic questions had been submitted. If there were people in this very room saying these things, what would they say to a gay person in the room like me? I realized that I could take my ring off if I wanted to and play straight. I could leverage all my other privileges and hide my minority status if I wanted to, but the black women on the stage couldn’t do that.

When I was 20 years old and on my mission in Mexico, my Mexican companion told me that something I said was racist. I disagreed and refused to listen. I was a good person. I loved Mexico. How could I be a racist? Unfortunately, I was more concerned with asserting that I wasn’t racist than I was with understanding why he thought I was racist. Now, with 16 years of hindsight, I understand that what I said was totally racist, but I wasn’t prepared to accept that back then.

When I was 29, just six and a half years ago, I wasn’t out publicly. After coming out to a close friend he asked me if I thought I was born gay. I told him that I thought homosexuality was like a mental illness, that there was something wrong with my brain that needed to be fixed. Looking back, I can’t believe that I thought that so recently. Something that seems so offensive to me now was true to me not that long ago. At 29, I had only talked to one other gay person about being gay--in my entire life. What changed my way of thinking was getting to know and getting close to so many other LGBTQ people. I’m grateful to my many friends who let me walk in their shoes because they helped me to understand myself better.

When I hear people say homophobic things, I try to be patient and remind myself that not too long ago I could’ve said something similar. I’m not trying to excuse ignorance or say that it’s okay to say hurtful things. It’s just that I know what it’s like to be incredibly rude without realizing it. And I’m so sorry for the ignorant things I’ve said and done (and most certainly unknowingly still say and do).

I’ve read a lot of articles about the panel last week and it is such a shame that a few rude, antagonist people hijacked a beautiful event. It’s disappointing that many of the articles focused on the racist comments while failing to highlight the powerful things that were shared by the panelists. I walked away from the panel wondering what I can do to help refugees and how I can be more inclusive of people whose backgrounds are different from mine. I walked home wondering what I can do to make my community better. I wish that the news had better highlighted how those in the audience felt a call to be better instead of those people who were trying to pull others down.

I have spent nine years at BYU. First as a closested undergrad, then as an out graduate student, and now as an employee. I have found that most people at BYU are so so good. And when they know better they do better. I’ve encountered a few people who are more interested in talking than in listening and understanding, but they are the minority. As a person of immense privilege, I understand how easy it is to miss my blind spots, but I’m trying hard to be better. One of the ways I try to be better is by elevating the stories of others. I have a painting of Jane Manning James hanging in my office. I tell almost every student who comes to my office about this faithful, black pioneer woman who is my hero. She, like so many others, deserves to be remembered.

Bravo! I think people of all colors say or at least think racist things from time to time. I try hard not to, but it slips in occasionally. Sometimes I think I have proven that I am not a racist because my best friend is black. Then I realize, that proves nothing. I have great compassion for those who have grow accustomed to racists attitudes, comments and actions as a part of their daily experience and I cannot imagine how that feels to face that hostility for no reason beyond the color of my skin.

Thank you for honesty. I will listen more and talk less. I will try to understand and not minimize or criticize.