The title of this post was meant to be overly dramatic. As I was preparing to leave Portugal this summer I made of list of the five things I wanted to accomplish when I got home. Getting a job and finding a place to live were numbers one and two and now that I had conquered those (in very unexpected ways), it was time to move on to number three: regularly exercising.

I worked out fairly regularly during college. I fell off the health band wagon frequently, but never for more than a month or two, but before last week I hadn’t worked out since April. Usually when I stop working out I go from thin back to my default body shape of scrawny. But slowing metabolism and two months of European pastries and inordinate amounts of cookie dough and brownie mix just made me go soft and it was time to fight back. I got permission to use the school gym once the kids left and went for the first time last Tuesday. I share a classroom with a lovely girl named Lindsey. We’ve spent many hours together preparing lessons after school and have become good friends. When I got back from working out Lindsey asked, “How did it go?” I responded by slightly elevating my sleeve, flexing my feeble arm and saying, “You tell me.” She wasn’t impressed.

When I had been on my mission for a little over a year I was assigned to work with an American companion. When I first saw him in the bus station I thought to myself, oh great, they sent me a jock. And he most definitely was. He had been captain of his high school football team and had played college football, too. He informed me that we’d be working out every night. I wasn’t opposed by the idea, but I wasn’t enthused by it either. Every night when we got home we’d work out for about 30 minutes. The first night we did tons of sit ups, push ups and curls. The next morning I was so sore that I literally could not sit up in bed. I had to roll over and then slide off the bed. I didn’t want to go through that again so I “went easy” this time. It still hurts, though. Even my neck muscles hurt which was very unexpected. I think the two things that are the most painful are laughing and getting dressed because they’re usually so effortless and pleasant. Still, I know the pain will subside soon and I’ll go from soft Ben to thin Ben again. I think scrawny Ben may be gone for good. 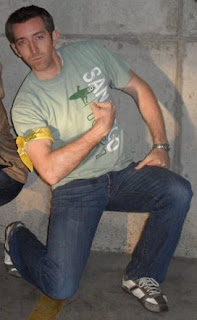 Getting dressed is soooo pleasant. Where are you and why aren't you visiting me right now? Want to come on Courtlin and my Thanksgiving adventure to the West Indies?

Oh yes! When are you going to the West Indies and why?

Life, Ben? Or just your body. I'd like to dispute your title.

Joleen, you are correct, my title could be improved upon. But it sounds more dramatic this way.

That moment when you flexed your muscle and said "You tell me" screams of Samuel Bergin.