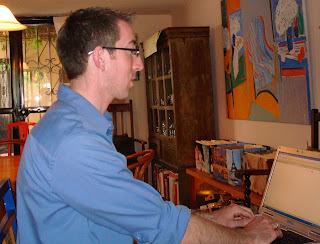 Happy Leap Day, everyone! As I was perusing Facebook this afternoon I noticed a link posted by one of my friends. According to the link, today is the last day for Google users to delete their browser history before the company changes its privacy policy tomorrow. The article recommended deleting your history today and I, being unfailingly obedient, obeyed. However, I love to journal and the idea of losing all that “history” made me kind of sad so I decided to scroll through my search history one last time. Here are some of the incriminating searches that I conducted in the last six years.

Aug 13, 2006 -- Searched for “Amanda dance”
This was the first Google search I did after creating my Gmail account. I was moving to Bolivia for the fall and I wanted one of those spiffy new Gmail accounts that no one in South America would have heard of. I don’t recall what the Amanda dance is, but a few weeks after this search one of my best friends married an Amanda so it was probably an inside joke. I should Google it.

Apr 21, 2007 – Searched for “police auctions”
I was hoping to get a cheap bike, but someone from my apartment complex randomly gave me a bike the next week for free.

Nov 4, 2008 – Searched for “jobs in panama city”
I was teaching high school at this time and not enjoying it at all. I guess I was looking for a way to escape.

May 24, 2009 – Searched for “britain’s got talent winner 2009”
I have no idea why I searched this. I never watched the show and I’m surprised that I even cared who won.

May 12, 2009 -- Searched for “mexico road map”
This was right before I took a solo road trip across Mexico. It was a blast and I feel like this search was very timely.

May 24, 2010 – Searched for “lost finale explanation”
I really wanted to know what was going on in that wonderfully confusing show.


Oct 11, 2010 – Searched for “feature geometry progressive assimilation”
Yuck, the things I had to learn about in grad school. There were a lot of boring searches like this

Feb 11, 2011 – Searched for “What is the correct pronunciation for coupon?”
A friend and I had disagreed on how to pronounce “coupon.” Turns out both ways are acceptable. I say “Q-pon.”

Mar 30, 2011 -- Searched for “gas prices spain”
I was considering renting a car in Spain. It turns out the trains are way cheaper.

May 3, 2011 – Searched for “adrien brody”
Someone had just told me that I looked just like him and I had no idea who he was. I looked up his picture and I realized that I did know who he was. And we do look slightly alike.

There were endless pages of Google image searches that I had done finding pictures to use in my class. It was fun to reminisce and the only really incriminating search I did was “how to overthrow the US government.” Just kidding, I never searched that. But even if I had, you’d never know it because all that wonderful history has just been erased.
Posted by Ben at 7:11 PM

You sure you don't want to explain the Care Bear search? It intrigued me (and made me laugh). Though I guarantee I've searched for far stranger things. Oh, and I pronounce it Koo-pon.

Here's the story behind the Care Bears search. A girl from my ward and I had been discussing childhood movies and that one came up. It was during finals week and I really didn't want to study so I looked up the movie and watched the entire thing on Youtube instead of writing a paper. I enjoyed it.

As far as the ant farm search on June 6, 2009: You gave me a gift card for my wedding a couple weeks later with a note instructing us to use it to buy an ant farm. This seems like quite a coincidence.

Megan, I hope you did buy an ant farm with the money. It probably wasn't a coincidence, I must have just had ant farms on my mind for some reason. Also, I'm usually too cheap to get my friends wedding presents. I must really like you and Ham.

I'm seriously curious about the Amanda dance since I am the Amanda you are talking about.