I all too often fit the European stereotype of being an uncultured American. I met up with Stephanie and Sofía last night for dinner and Stephanie took us to a miradouro that she really likes. A miradouro is essentially a little park with an excellent view and Lisbon has a ton of them because there are so many hills. Stephanie and Sofía love them and are always talking about new miradouros they’ve found. Last week I met up with the gang for dinner a block from my house and Stephanie took us to a miradouro that is only four blocks from my house. I didn’t even know that it was there. She was shocked to learn that I hadn’t gone up there and said, “Didn't you see the trees,” as if they would have been enough of an incentive to climb a steep hill. I said, “Well, yeah, but you have to climb up this huge hill to get to them.” We then trudged up the hill and I was instantly converted to the find-as-many-miradouros-as-possible crusade. Here are some pictures from the one we went to yesterday. 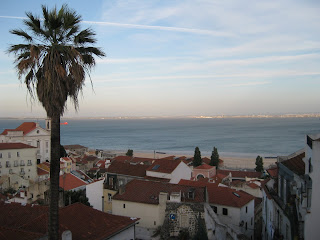 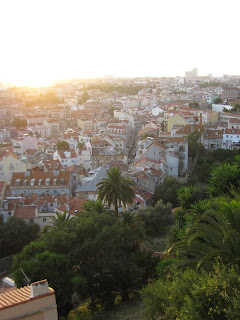 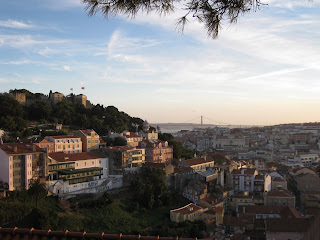 The three of us sat down to eat dinner at a delicious hole-in-the-wall restaurant. We were talking about what we had done during the day and their day consisted of visiting museums, and taking scenic boat tours, etc. while my day mostly consisted of going to the zoo and then slowly backing away from the entrance because it was so expensive and reading Harry Potter. Not wanting to seem uncultured I told them about a cool park I had found. I was describing where it was and they were a little confused because there isn’t a park there. And I said, “Well, it’s not a park, per se. There’s some business or something there and I just walked about the outside." A light clicked on in Stephanie’s head and she said, “Oh, you’re talking about the museum. Didn’t you go inside?” Apparently, I stumbled onto the lawn of the best free museum in Lisbon and hadn’t even gone inside. Stephanie has already been there twice. And so, the uncultured American stereotype lives on. Here are some pictures of the museum lawn. 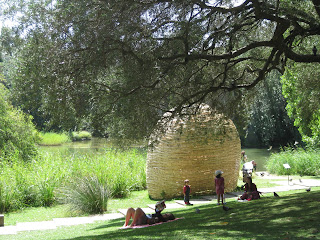 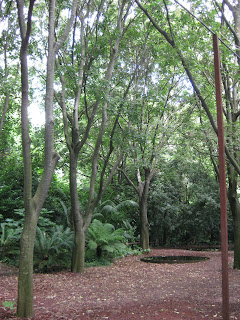 At dinner, Sofía, Stephanie and I briefly complained about our classes. It appears that our teachers haven’t taken a second language pedagogy class in a decade or two because they teach us in a way that I would consider "antiquated." My teacher is better than Maria de Jesús, but still a little lacking. He talks for most of the class and we listen and take notes. Sofía brought up how on the first day of class Maria had talked about the importance of pronouncing words correctly. She said that we all needed to learn to roll our r’s. She then went on to describe how this sound is produced saying that it’s a bilabial sound. For any non-linguistics reading this, a bilabial sound is one made with both of your lips. When she said this I cocked my head to the side wondering if I had heard correctly and then I giggled inside as I pictured what a bilabial rolled r would sound like. Sofía and I had some fun at dinner trying to produce just such a sound which basically just ended in laughter.

Sofía went on to say to that as a university professor Maria shouldn’t be making such horrific errors in her teaching. I then said, “Yeah, after all, the only bilabial sound in Portuguese is the m,” to which Sofía responded, “No, Benjamin, there’s also the p and the b.” I quickly realized that she was completely right and that in one simple statement I had lost all credibility as a linguist.

Usually when I speak Spanish I’m speaking with people that speak English as well and I’ve developed a bad habit of throwing in English words when I don’t know the Spanish one. For some reason at dinner I wanted to mention the flux capacitor from Back to the Future. Stephanie speaks English alright and Sofía doesn’t speak much at all. So here I was trying to explain what a flux capacitor is in Portuguese with the two girls giving me polite, but confused looks. I finally just changed the subject because my flux capacitor comment wasn’t that interesting to begin with.

As we were leaving the restaurant, one of the girls commented that the restaurant owner was probably laughing his head off right now because of how odd our little group is. We spoke our broken Portuguese the entire time each of us with our own accent: Sofía with her clear, Spanish vowels, Stephanie with her French r's, and me with my schwas. We’re quite an unlikely group. As I thought about how we all have our different backgrounds and languages and nationalities, I was reminded of The Land Before Time and how five dinosaurs formed an unlikely group and made it to the Great Valley together. In our group I’m Little Foot, of course, because of my long neck. I don’t know who the others would be, but whomever we my represent we’ll all trying get to the our Great Valley together (the Great Valley being a metaphor for fluency in Portuguese, obviously). I'm glad that movies from the eighties are still relevant in my everyday life.
Posted by Ben at 2:39 PM

This is hilarious, but I'm slightly offended that you refer to them as "the gang". I guess we've been replaced.

Ben, you crack me up.

Allison, I was the one that was replaced. During Spring term "the Gang" started a new dinner group without me. Also, our Gang was with a capital G thus magnifying its importance forever.