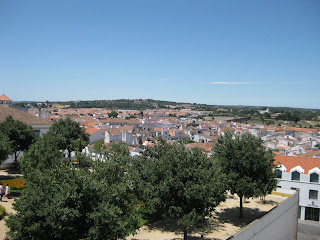 Having descended from Schilatys and Smiths I have very good genes. From my mom I inherited my wonderful height, but that came with a price – my feet. I’ve always thought that my feet were ugly, but I think that feet are generally that way. I was so self-conscious about my feet that when I was 14 I wore my socks into a hot tub not wanting my friends to see them. It was a pretty ridiculous thing to do, but that’s how much I was embarrassed by them. Luckily I’ve out grown that feeling and I’m mostly just glad that my feet keep me mobile. My dislike for my feet (toes in particular) led me to not like open toed shoes. I think I’ve only ever owned two pairs of flip-flops. The point of all this is that I caved in and bought some open toed shoes on Friday. It’s not very hot here yet, but I still get a little over heated walking around for hours with a backpack on. I often just want to sit down on a bench and kick my shoes and socks off so that my feet can cool down. My new shoes were bought for this functional purpose. I wore them all day on Saturday and they’re awesome and led to hours of comfort. 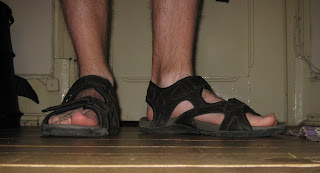 Speaking of Saturday, I went to Évora with three girls from my class: Aurora, Cecilia, and Angélica. It’s only 90 minutes outside of Lisbon so it makes a nice day trip. Évora was a lot smaller than we had expected. We picked up a map at the bus station and walked straight to the main plaza and were pretty surprised when we arrived there after only ten minutes of walking. We saw everything we had wanted to see in a few hours, but had hours to wait before our bus left so we decided to check out a park we hadn’t seen yet. I led the group through the winding streets and when we arrived there I pointed to a very unimpressive park and said, “Well, here’s the park. It’s not very exciting.” Cecilia pulled out her map and said, “Everything looks so much bigger on the map.” Évora is very small and even though they're pretty, all the streets look pretty much the same. 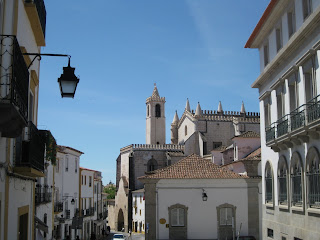 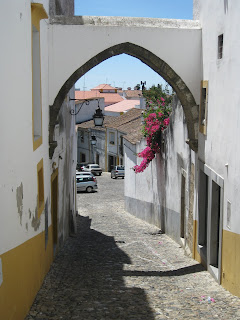 My main reason for wanting to go to Évora was to see its famous bone chapel. Apparently a few hundred years ago some monks thought that building a room out of human bones would help them to contemplate life and death. An obvious conclusion, right? The chapel is decorated with the bones of thousands of people that they dug up from the local cemetery. It’s kind of morbid, well, really morbid, but cool to look at for five to ten minutes. I think that when I get home I’m going to decorate my room with pictures of obese people to help me contemplate the importance of exercising regularly. 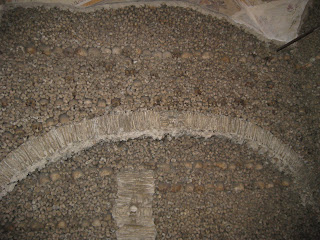 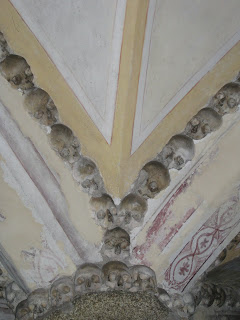 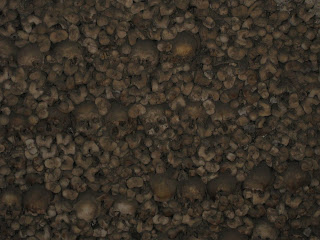 A bunch of people from my class went on another excursion today to Mafra. They invited me too, but I went to church instead. And honestly, the idea of going there always made me laugh. No one else seemed to think that the name of the town was funny, but every time someone said “Mafra” all I could think of was the Japanese monster Mothra. Now correct me if I’m wrong, but I think Mothra is a giant moth that attacks Tokyo when Godzilla is on vacation. Whatever Mothra is, giant moths were all I could think of as people talked about how excited they were to go to Mafra.

From left to right: Me, Aurora, Cecilia, and Angelica. Angelica does have a left arm, she just moved it as the picture was being taken and it disappeared. 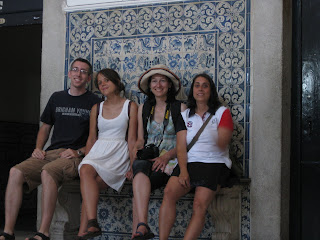 Ben, There is an important inherited trait that surpasses your feet issue; hair. The good news Is that you have Smith hair - that means you have lots of it. The fact that this gift comes at a price, premature graying, is much better than premature balding. Mom