It's not very well known, but today is National Women's Suffrage Day. Although it sounds bad, suffrage is actually a very good thing. Exactly ninety years ago on December 21, 1918 congress passed the 18th amendment allowing women the right to vote. Since December 21st is the shortest day of the year some congressmen who voted against the 18th amendment said that just like the day, the amendment would be short lived and would soon be repealed since women would just vote for who their husband voted for. The bill was passed largely due to the efforts of Winifred Banks whose landmark speech Our Daughters’ Daughters Will Adore Us is credited for rallying thousands of women to the cause. Winifred, along with over a thousand women, marched to the US Capitol building shouting “Votes for women” and “Cast off the shackles of yesterday.”

One of history’s greatest ironies is that Winifred banks ran for the US Senate in 1920, but lost to a man. She ran again in 1926 and lost to a woman. She never ran for a political office again.

Despite all the progress that our country has made in the last ninety years there is still a lot of gender inequality. I deal with it on a daily basis and I am suffering due to a lack of suffrage.

At work we have men’s and women’s staff bathrooms. The men’s room looks just like any other bathroom: toilet, sink, and a random table for setting things on. I assumed that the women’s bathroom looked the same until one day when one of my colleagues forgot her key and asked me to unlock the bathroom for her. Oh the shock that filled my mind when I beheld the wonders of the women’s bathroom! The following pictures should illustrate the lack of equality in places where men and women do their business. I think that Winifred Banks would want me to have a framed picture and tablecloth in my bathroom too. 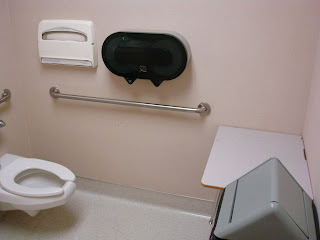 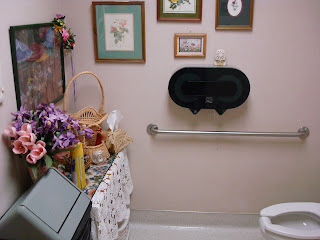 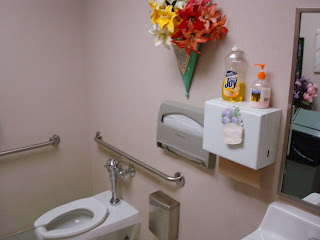 Historical note: All historical information in this post is false and is the invention of the author. Any similarities to real historical events are complete flukes. Actually, most of the above information is based on events from Mary Poppins. The pictures were taken by the author at and represent true inequality.

A girl in my sixth period class got wind of the write-down-funny-stuff-that-Mr. Schilaty-says thing and started her own list. I don't say things so that students will write them down - this is just how I talk.

"And they got really mad, so I'm not gonna do it."

Student: "Can I punch the next person who makes fun of me?"
Me: "Yes."

"It helps you be smarter."

"I think you're big enough to handle it yourself"