Pride Is the Opposite of Shame 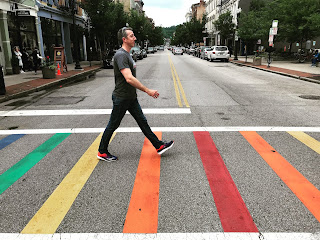 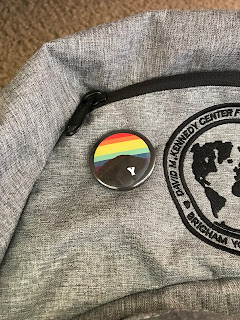 I have two rainbow pins displayed on my backpack. Each of them containing a symbol that ties them to BYU. They’re rad because they reveal two pieces of me to whomever is standing behind me. I had owned both them for many weeks before attaching them to my backpack. Each pin was placed on my backpack following an incident that made me feel misunderstood as a gay Latter-day Saint. I put them on my backpack because I felt like gay people like myself needed more visibility.

I distinctly remember walking across BYU campus the day I put the first pin on my backpack, feeling proud to be seen. I walked by the Harold B. Lee library where I had once secretly read a handful of books about how to overcome same-sex attraction. Now, ten years later, I was walking across campus with a small circular object advertising the thing that had brought me so much shame for much of my life.

I didn’t do anything for Pride month. I don’t really enjoy parades and festivals aren’t really my thing. I just wasn’t interested in going to any pride events so I didn’t. I didn’t hang a rainbow flag, or change my Facebook profile picture, or paint my face. But a lot of people did. I know that Pride makes a lot of people uncomfortable. It might feel “in your face” or flamboyant. While I didn’t do anything to celebrate Pride month this June, I can understand why so many people felt the need to celebrate.

I remember times in my 20s when I would’ve been relieved if I had been diagnosed with terminal cancer. I would’ve been free of same-sex attraction, my suffering would be over, and I could die a hero. Being dead and straight was a better option than being alive and gay. That’s what shame did to me. It made me want to be dead.

Overcoming that shame took years. The antonyms of pride—depression, gloom, melancholy—were often present in my life whenever I thought about dating, marriage, or my future. I don’t feel those feelings anymore when I think about my sexuality. The shame is gone. I now accept my sexual orientation as something that I couldn’t change. It is a part of me. And I want to live for a very long time. My outlook has completely shifted from wanting to be dead to wanting to live a long, full life. And isn’t that something worth celebrating?

My story of growing from shame to acceptance isn’t that unique. So many LGBTQ folks have walked a similar path. So when I see a mom hang a rainbow flag from her front porch, I don’t think, “c’mon, keep your life to yourself.” Instead, I imagine a mom who was once uncomfortable and ashamed to have a gay son who is now saying, “I love my son. All of him.” When I see my friends dressed in rainbow colors marching down the street I don’t see them as being flamboyant, but I see them celebrating their desire to live. A desire that they may not have always had. And I’m grateful. 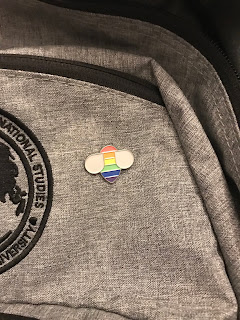 I’ve only been to one pride parade. It was September 2016 in Tucson, AZ. I had been invited to march with Mormons Building Bridges. Those who march with Mormons Building Bridges wear their Sunday best to let the LGBTQ community know that as Latter-day Saints we want to be at the forefront of expressing love and compassion. I was hesitant to go. I decided to go and then decided not to go a few times. I recall discussing whether or not go with my straight friend Josh. He told me that if I decided to go he would go with me. I even emailed my stake president asking if it was okay for me to march in a pride parade. His simple response was, “I trust you.” About an hour and half before the parade started I felt compelled to go. I texted Josh, we both put on our church clothes, and drove over to the parade area.

There were only 14 of us in the Mormons Building Bridges group. One of the women who came was from the Spanish branch I was attending. She didn’t speak English and told me that her son had just come out to her and she wanted to walk in the parade so that he knew she loved him. While we were waiting for our turn to march the organizer of the parade greeted us all. She said she had grown up Mormon, but had left the Church in her 20s. She told us how touching it was to see us there.

Josh and I were asked to hold the Mormons Building Bridges banner. As we walked down 4thAvenue I distinctly felt the presence of the Holy Ghost. Spectators shouted “The Mormons are here!” and we were cheered and cheered. It was a deeply moving experience for me to be in a pride parade dressed as a Latter-day Saint. We could have easily been booed, but instead we were welcomed and praised for our participation. We belonged the least of any group there and yet we still belonged. And those who saw us were adamant that we belonged and that they were glad we were there. No one was ashamed of our presence. One of the parade officials took a group picture of us after the parade. She said, “Thank you, thank you, thank you for coming.” I hope that any LGBTQ person who attends church will feel as welcomed as I felt at that pride parade.

And if the word pride makes you uncomfortable, here are some synonyms that might be easier to relate to—dignity, self-respect, honor. Gay dignity means that I am comfortable being myself around others. Gay self-respect means that I welcome all parts of me as important ingredients to who I am. Gay honor means that I no longer want to die because of my sexuality.

June was a healing, celebratory month for so many people. I hope that we can celebrate our lives and who we are and who we want to become throughout the year. And I hope that every person, especially those who have been previously weighed down by shame, feel an overwhelming sense of dignity, self-respect, and honor.
Posted by Ben at 9:14 AM

YES! No shame No Mo ☺️ I love your words and your heart, Ben. Thank you for sharing ❤️

I have never connected with the pride thing. I know all too well living with the shame thing. Now I live with neither. I try to live genuine and charitable and encourage others to do the same.

i have a similar growth. not quite as far with thr rainbows, but getting close.

Thank you for this perspective Ben!

Thank you for this. Beautiful words!

I am the mom with the rainbow windsock hanging on my porch. For every LGBTQ+ individual that comes out, there is a mom and/or dad that must step forward with pride also and honor their child. Thank you for these wonderful words! Speaking of Mormons Building Bridges, I am flying to Utah for the conference in September. Will you be there Ben?

This is beautiful, Ben. Thanks for helping all of us understand.