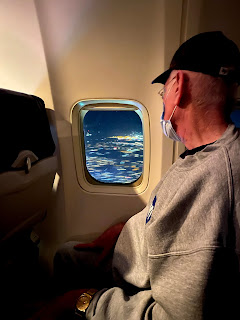 On Monday, February 8th my sister picked up our mom and drove her from her home of 40+ years to her new home at an assisted living facility. I traveled home to be with my dad for this event because I didn’t want him to be alone. That morning I sat on the couch with my mom and held her hand, knowing that in a few hours she’d be leaving. I told her she was moving and she sighed and said, “Oh dear. I just always want to be with you.” Before my sister drove her away, my dad said he needed a minute to cry. So he sat on his bed and wept. Mom wandered in to comfort him and said, “It’s going to be okay. I just always want to be with you.” This all happened while I was teaching a class online. My sister had invited me to go with her to the assisted living place, but I had declined. While I was teaching I turned my head to look out the window and saw them pull away. Then I looked back at 25 tiny boxes of faces on my laptop screen and continued to teach my class, pretending that life was the same as it had always been.

My dad doesn’t fly. He has really bad tinnitus--ringing in his ears--and he worries that flying could make something already unbearable even worse. I don’t blame him. I remember the moment I knew that my dad would never fly again. He had purchased tickets to come to my PhD graduation in Tucson in 2017. The flights were already paid for, but he very apologetically backed out a few days before the trip. If my dad wouldn’t fly to my graduation using tickets he’d already bought, I couldn’t imagine something he would be willing to fly for (he did drive to all my other graduations, of which there have been far too many).

To help him adjust to living without my mom, I decided to take my dad to Palm Springs, CA to spend some time with his sister and brother-in-law and be in the sun. He hadn’t been on a vacation since my mom was diagnosed five years ago and he became her primary caregiver. The trip meant 20+ hours of driving each way. I was happy to make the drive with him. We were going to start the trip Tuesday afternoon after I finished work. Monday night my dad’s friend Sabrina came over for her weekly hangout with him. As they talked I looked up flights to Palm Springs from Seattle just for fun and they were $58 each way. I was not expecting them to be so cheap, especially last minute. I mentioned this to my dad and he seemed to almost consider the idea. Sabrina thought flying would be a good idea. I didn’t want to stress him out on an already tough day, so I dropped the idea of flying.

The next morning I was thinking about the long drive across the width of the country and I really didn’t want to do it. I looked up the flights again and they were still $58. I approached my dad and said I thought we should fly. He slammed his fist on the table and said enthusiastically, “Let’s do it!” I checked in with him a few more times after he had some time to think just to make sure he was actually willing to fly and then bought the tickets.

I was worried he was going to back out and wasn’t 100% sure he was going to go through with it until we were on the plane. He said he was nervous and he was. I texted all my siblings and asked them to pray for him. I gave my dad the window seat because he hadn’t been on a plane in nine years and it was a rare sunny day in Seattle so there would be a lot to see as we took off. I wrote in my journal Tuesday night: “When we were flying I looked at him looking out the window and started to get emotional. It felt like I was watching him get his freedom back. He’s courageous. When we landed I asked how his ears were doing. He got emotional and said, ‘I feel good. Lots of people prayed for me and it worked.’” On our layover in Oakland he kept saying, “Now that I can fly, I can go anywhere in the world.” If you had told me on Monday morning that my dad would get on plane on Wednesday, I would have said you were crazy. And yet it happened.

The trip to Palm Springs wasn’t as restful as we had hoped. There were a few snags with the assisted living place that stretched our already depleted emotional reserves. But dad was here with family and I think that really helped. I heard him say multiple times, “I hope she’s alright. I hope she’s happy. I hope she’s not lonely.” He just loves her so much and wants the best for her. We've gotten multiple updates from my brothers that she is doing well and thriving in her new home.

While in Palm Springs we took a day trip to Joshua Tree National Park. My dad loves the National Parks. More than once he said, “I can’t believe I’m actually here. It doesn’t feel real. I never thought I’d be here.” Charlie was passing through town randomly and spent the day with us at the park. He was doing his typically Charlie thing and taking tons of photos for Instagram. We watched him try to land a few flips, but never land them quite right. Right before his fourth attempted my dad shouted, “You got this, Charlie! This will be the one! You’re gonna land this one perfectly!” And that is most Buzz Schilaty thing he could have said. My dad encourages, he cheers, and he builds people. He’s mostly to blame for my overconfidence and my belief that I’m awesome and can change the world. Because that’s how he always talked to me.

Today we’re getting back on a plane. We’re flying back to Washington. Back to my dad’s new life living in a house all by himself. I’ll be there for a few more days to help ease him into his new normal and curb some of the pain of his loss. My heart broke for him this last week and I’ve also been so proud of him. I don’t know what the next years of his life will look like, and I’m going to try not to even guess, because I think he’s going to surprise me.