Europe! Pronounced: your up 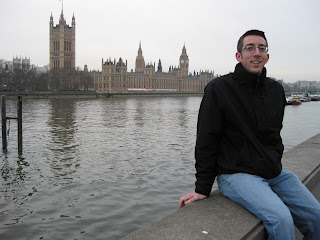 Over the weekend I was kindly reminded by two of my friends that I haven't posted for a while and they were interested in hearing about my trip to Europe. I hope this post makes up for the long hiatus.

One of the reasons I haven't posted for so long is that I fill up my free time with things other than posting my life on the internet. Most of those things are complete wastes of time. One of my biggest time fillers which is definitely NOT a waste of time is Lost. I don't know how many of you watch Lost, but it's pretty great. A few years ago I spoke with some people at BYU who were absolutely addicted to the show and they lamented that they had to wait three more years for the show to end and for everything to finally be explain (Lost is very confusing). Thinking that I was smarter than the average bear I decided to not watch Lost at all until the right before the last season was to start. My plan was to watch the first five seasons on DVD and then to watch the sixth and final season on TV. My plan is working out splendidly. I’m currently in the middle of the 5th season and the 6th season starts in a few months. Turns out I’m smarter than the average human too! Sad fact: I once watched 20 episodes of Lost in 24 hour period. Not my proudest day.

When I got back from Europe I had loads of free time. I filled it by looking for jobs and watching TV. A friend of mine works as a substitute teacher and she recommended that I do the same. My initial thoughts were, I’d rather sell my plasma, but I signed up to be a substitute teacher anyway. The way I get sub jobs is through an automated phone message. I get a call from a machine, the job is described and I can push 1 to accept and 2 to decline. As soon as I signed up to be a sub I started getting job offers all the time, but I was too afraid to accept any of them. One morning I was awakened at 5:00 am by a sub call. Just as before I was too nervous to accept the job, but it was dark and I was only mildly coherent and I accidentally pushed the wrong button and accepted the job. I angrily rolled out of bed, got ready, and drove to work. Now I sub all the time and it’s fantastic. I think that everyone should get paid to take attendance and read a book.

The automated sub message is voice activated so when I answer the phone the machine doesn’t start talking until I say something. For a while I just said hello like a normal person. But I quickly learned to recognize the sub finder number on my caller ID and sometimes I’d answer the phone and wait 10 seconds and then say hello. Now I answer those calls by making noises. Most of them are grunts that sound like uh, duh, muh. So if you ever call me and I answer the phone by grunting I just thought that you were the sub finder calling me and I was trying to make myself laugh by grunting into the phone.

I’d like to think that I’m the “cool sub.” The fact that I’m a cool sub goes without saying since I am a sub and I’m most definitely cool. But being cool and being a sub does not simply make you a “cool sub.” That takes a little something I like to call “picking your battles.” It works fairly well. I was subbing in a middle school math class and a girl who was supposed to be doing a worksheet was talking to me about something that I didn’t care about and I feigned interest. At one point she asked, “Are you making fun of me in your mind?” I leaned in a little and replied, “Yes.” Then she said, “I’m going to tell on you” to which I replied, “Fine, tell the principal that the sub was making fun of you in his mind and see what happens.” She laughed and I won and then I got paid for doing it.

I was subbing a few weeks ago and after introducing myself one of the students asked me what my first name is. At first I made it seem like I wasn’t supposed to tell them just to add to the fun. Then I said, "Guess! I’ll give you a clue, my name’s in the Bible." The first guess was Joseph and I said, "Close, I'm named after Joseph's youngest brother." That was followed by perplexed looks. Then people started guessing names like John and Jesus and a boy even guessed Joseph again which was followed by many other students informing that boy of how stupid he was for guessing a guess that had already been guessed. I finally gave up and said, "I have the same name as the leader of the Others on Lost," and a girl instantly shouted "It's Ben!" I guess teenagers are more familiar with pop culture than biblical genealogy. Who’d of thought?