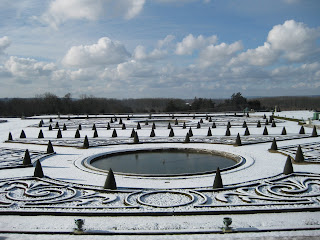 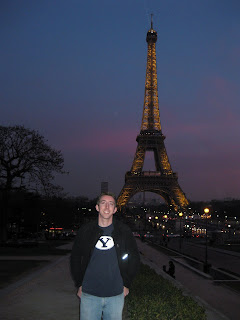 We visited Versailles palace which was absolutely stunning. It was filled with art and is probably the most ornate building I've ever seen. My reaction to the first room I saw was, "WOW!" and the second room, "WOW!" and the third room, "Wow" and the fourth room, "wow..." and the fifth room, "This looks like all the other rooms." There is no denying that Versailles is incredibly spectacular, but it all kind of looks the same and it's difficult to be blown away by the same thing over and over again. I really enjoyed touring the palace, but I think I would have really loved it had I been an art lover or a lover of French history. However, I am neither of those things.
Posted by Ben at 2:33 PM 1 comment:

My teaching contract ended on January 26th and all of a sudden I had tons of free time and more money in the bank than I'd ever had before. Time+money=loads of fun. At the end of January I over heard my good acquaintance Ezra telling a friend that he wanted to go to Europe and was going to go by himself because he had no one to go with him. Not wanting to miss a chance for adventure I burst into the conversation that I wasn't a part of and said, "You wanna go to Europe? I wanna go! You going 'cause I'll go!" Ten days later I was in Europe. I didn't blog whilst in Europe so I'm going to blog about the amusing things that happened while I was on vacation. This is the first installment.

Our first stop was London. London had just had a huge snow storm the week before we arrived and was very, very cold. I had brought warm clothes with me, but I hadn't packed a hat or gloves. Neither had Ezra. We met up with Ezra's friend Heath and went to a 99 pence store to buy some. Ezra was eying a hat that didn't have a price tag and he said, "Hey Ben, ask the store clerk how much this costs." I grabbed the hat, walked up to the cash register and said, "How much does this hat cost?" The man at the cash register said "99 pence" very smugly and Ezra and Heath burst into laughter. I must admit that it didn't immediately dawn on me what had just happened. Then I realized that I had been tricked into asking how much something costs in a 99 pence store where everything is 99 pence. I reacted to this situation just as any normal person would -- by feeling stupid.