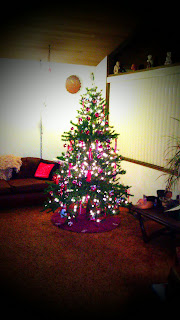 After watching the Christmas devotional this year I got into the Christmas spirit a little bit more and wanted to set up a Christmas tree in my house. I emailed Kris to see if they had a fake Christmas tree in their house and she told that they did and that I could set it up. She did warn me, however, that they only have WSU ornaments. I don’t think I’ve mentioned this before, but Kris and her husband are huge WSU fans (not huge-fat, but huge-devoted).

I invited my new friend Kelli over last Saturday morning to help me set up the tree and decorate it. Before she came over I located the tree and Christmas ornaments in the garage and hauled them into the living room. I didn’t see the tree stand right away, but everything in the house is so well labeled that I didn’t think it’d be hard to find. Kelli showed up while I was looking for the stand and we had delicious Belgian waffles for breakfast. We then started to look for the stand, but couldn’t find it. I eventually called Kris and she explained where she thought it was in the garage, but I didn’t find it. As I said before, there are labels everywhere and the box the tree came in had a sticky note on it that said, “stand in downstairs closet ’01.” It seemed that the note was telling me that in 2001 the stand had been stored in the downstairs closet, but was it still there or was the note outdated? The other problem was that there are multiple closets downstairs.

Kelli and I started snooping through the closets and we found some pretty interesting stuff. My favorite item was an ET mask. I also found a box that was labeled “Sacks: cutesy & handles.” I opened up the box and it was filled with cutesy sacks with handles which was exactly what I had expected to find. Like I said, everything is labeled. Kris was sure that the stand was in the garage so Kelli and I searched in there for quite some time, but it was really cold that morning and we couldn’t find it. I don’t know Kelli super-well and I felt like a total dork for inviting her over and then not being able to find the stand. She was gracious about the whole tree stand catastrophe and eventually had to leave leaving me with a treeless living room. I had hoped to have a decorated tree by the time Kelli left, but this was all I had. 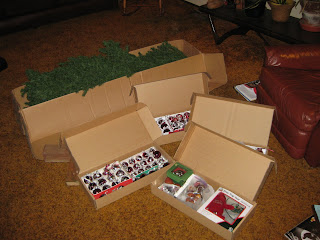 That night when I got home I was walking through the garage and thought popped into my head and I thought, the tree stand is behind the shop vac. I walked over to the shelf that had the shop vac on it, moved it aside and there was that bleepity bleep tree stand. It was a moment of pure triumph. 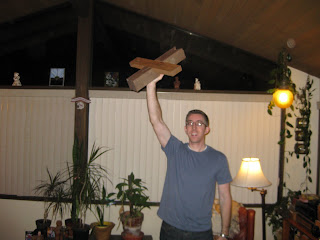 Kelli’s usually busy when I invite her to do things so I decided to just set up the tree by myself. However, I feel like my life is more and more becoming the male version of this song so yesterday I decided to invite my friend Colleen over to help me set up the tree. She agreed to come over and while we were making plans through texting I got a text from Kelli asking me if I’d set up the tree yet. I had texted Kelli on Saturday right after I found the stand and hadn’t heard from her since so I assumed that she had moved on from the whole let’s-set-up-a-Christmas-tree thing and was no longer interested. I texted her back saying that I was going to set it up that night. I then received a text saying, “I’m on my way. See you in 10 minutes.” Thinking that Kelli had taken my mention of setting up the tree as an invitation for her to join me I panicked slightly thinking that I had inadvertently invited two different girls to my house at the same time. Also, I now had the awkward task of explaining to Kelli that I had invited someone else to help me do what I had originally invited her to help me do. This was the kind of mess that people like me don’t usually get themselves into. I looked at the text a little more closely and saw that it was from Colleen and was instantly relieved. I then got a text from Kelli that said simply, “OK have fun.” Awkward moment averted.

Colleen and I had a blast decorating the Christmas tree with WSU ornaments. Even the tree skirt says WSU on it. It’s a bit much, but if you don’t look too closely the tree just looks red and you can’t tell that everything says WSU. We decided not to hang up the little WSU footballs. That was just too much. We also ate two Cinnabons.

This is what the tree finally looked like when we were done. 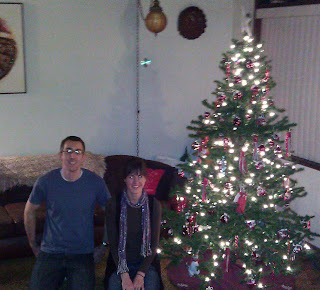 Notice all the WSU themed ornaments. 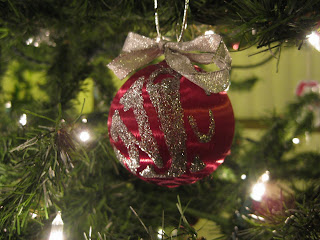 Even the ornaments that weren't originally WSU ornaments were painted to fit the theme. Like I said, they are huge fans. 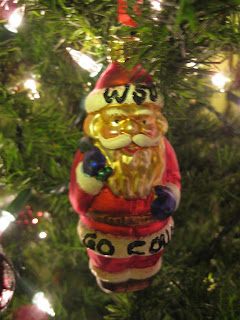 Now every time I look at my Christmas tree I'm filled just a little bit more with the Christmas Spirit. I also feel like shouting, "Go COUGS!"
Posted by Ben at 7:07 PM 1 comment:

A World of Pure Imagination

For FHE on Monday we toured the Seattle Chocolates factory. A girl from church’s dad is the president of the company and he took us on a little tour. Lots of people, myself included, made lots of Willy Wonka jokes. Yes, I know that making Willy Wonka jokes in a chocolate factory is a bit cliché, but it was hard to resist. I later saw Willy Wonka and the Chocolate Factory playing on a TV in the tasting room and felt a little less guilty about my Wonka jokes. The factory does not employ any oompa loompas (that we were told about), but they do employ a number of people of Mexican descent who, sadly, did not teach us any morality lessons through song and dance.

The area of the factory where they actually make the chocolate wasn’t super-interesting and could easily be mistaken for a box factory, but the tasting room was awesome. The decor was very modern with white plastic chairs that swivel around and a carpet made of leather strips. We were told that we could eat as much chocolate and we wanted and I ate a lot. Since we were all Mormon the guy passing out the samples told us that all the alcohol flavored chocolates had no alcohol, but all the coffee flavored chocolates did have coffee in them. Good information. My favorite chocolate was the mimosa filled one and I’m convinced that if I were a drinker I would enjoy a tasting mimosa every now and then. Well, as long as it’s covered in chocolate.

The best part of the tour happened rather unexpectedly. The guy giving the tour told us a story about how some famous chocolatier had come to the factory and taken a pitcher of liquid chocolate and poured it right down his throat. The tour guide then said, “It’s a great experience that I want you all to have.” So he grabbed a pitcher of chocolate heated up to 115 degrees and one by one he poured some into our mouths. It was a little messy, but absolutely delicious. We also got to make our own chocolate bars and we were each given a chocolate bar that they recently invented that hasn’t hit stores yet. It was filled with peanut butter and was absolutely delicious.

Interesting fact: chocolate does not have caffeine in it; it’s added in.
Posted by Ben at 9:12 PM 4 comments: