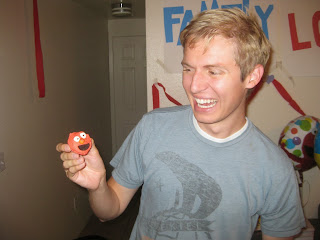 And now that Michael can no longer complain about his forgotten birthday, he can move on to complaining about other things like slow drivers, the shabbiness of Tucson, far away parking, and people that care too much about ultimate frisbee.
Posted by Ben at 2:11 PM 4 comments:

The Wedding: A Ben Perspective

Kevin and Allison tied the knot yesterday and it was a wonderful day.  Here's how it went down from my perspective.

The night before the wedding Allison's family had dinner at a Mexican restaurant so Kevin could meet all his new in-laws.  The bride's maids and I were invited too.  I sat with the bride's maids.  At one point I was telling them about a girl I'm friends with in Mexico and said, "And she's really dramatic--because she's Mexican."  At the very moment I said that our Mexican waiter was leaning in to fill our drinks and obviously overheard my racist comment.  Luckily we had already eaten so there was no fear of my food being spit in.  One of the bride's maids pointed out that he would probably have agreed with what I said so no damage done.
Kevin and I shared a hotel room the night before the wedding.  We both went to bed pretty early and when it was still dark I heard an alarm go off.  I was half asleep and knew that Kevin had to get up early for pictures so I assumed it was his alarm.  I said, "Happy wedding day, Kevin!" to which he responded, "What are you talking about?"  I continued, "You're getting married today.  Wasn't that your alarm?"  Nope, it turns out it was my cell phone.  Someone texted me at 12:15am to remind me to bring milk to the church potluck on Sunday.  I was bummed that it wasn't morning yet and that I had to go back to sleep, but more than anything I didn't understand why someone would text me such a random thing at such an inconvenient hour.

The next morning Kevin got up on time and left for pictures.  Five minutes after he left I was half asleep again and I thought I heard a knock at the door.  I thought I'd just imagined it, but decided to check just in case.  It was Kevin's mom trying to find him, but he had already left.  Bummer, because Allison wasn't going to be ready on time and now Kevin had to wait alone.  I texted him to let him know that she'd be 30 minutes late (and his mom called him too, of course) and he texted back, "I was expecting it since I know her enough to marry her and all."  Kevin is wise.

While the family and friends were sitting in the sealing room waiting for Kevin and Allison, one of the temple workers very kindly reminded us to be reverent and that if we need to talk, to do so quietly.  I was sitting at the end of a row with all the bride's maids.  One of them leaned over to me and asked if I would grab her some tissues ('cause girls get weepy at weddings).  I asked her how many and she said three.  I got up and walked over to the Kleenex box and pulled out three tissues.  The room was very quiet and it felt like everyone was watching me.  Not wanting everyone to think that I thought I was going to cry through three whole tissues, to removed any suspicion I said, "They're for the girls."  Everyone laughed and I remembered that I'm very bad at being reverent and quiet.

The sealing was totally awesome and I recorded all my feelings about it in my journal.  Let me just say here that seeing two of my best friends so happy to get married was one of the highlights of my life.

And then we took pictures outside and not only was it hot, but it was incredibly humid because of all the rain from the previous day.  It felt like Florida.  And the grass was pretty soggy and a lot of the girls' heels sunk into the ground which made me chuckle on the inside and made me grateful that my shoes are so big they're basically snowshoes.

One Mexican woman made all the food for the reception and it was unbelievably delicious.  I may have finished someone else's food who was too full to finish.

The reception included a dance which was surprisingly fun.  Julianne, one of Allison's bride's maids and a good friend of mine from BYU, really loves Latin dancing and couldn't wait to dance.  I'm not the best dancer, but Julianne showed me what to do and it ended up being pretty fun.  At one point Julianne was shimmying a bit and an old woman with a walker came over and said, "Remember, you're Mormon," implying that her dancing was unbecoming of a Latter-day Saint.  We all got a laugh out of that and the shimmying didn't stop.

Kevin's cousins decorated his car Mexican style.  They attached miniature Mexican flags, wrote "Viva México" and lots of other Spanish phrases, and even tuned the radio to a Mexican station so that when Kevin turned on the car it would blast Mexican music.  Before the lovebirds got into the car the cousins put two huge sombreros on them which made kissing difficult.  I don't know how Allison from a few years ago pictured driving away from her wedding reception, but I assume she didn't see herself in a Mexican themed car wearing a sombrero.  Still, she looked very pleased.

It was a fun day.