I was recently going through some old emails between me and a friend and found this advice that I had written in 2010. She had asked what it takes to be awesome. Here's what I said:

Becoming ridiculously awesome is simple. You need to offer your friends free food as much as possible. Also, you need to plan frequent parties that are also awesome, but varied so that people don't get bored. You need to come up with a catch phrase (ie. stay rad!). Always be doing something awesome with your life and talk about the awesome things that you do in the presence of others, but not is such a way that you look prideful. Don't break anyone's nose, even by accident. Be friends with everyone. Get your homework done early so that your nights can be filled with untold partying. Recommend new music to your friends. Say witty things. Dress fashionably. Attend BYU sporting events. Become proficient in Spanish. Go on a road trip and post pictures on Facebook. Always have fresh breath. Don't do anything that can be scrutinized. Register as a Republican. Dance in public, but not in a goofy way. Use widely accepted bad grammar (ie. never use the word "whom"). Get your nails done once a month. Have awesome roommates. Give clever advice (ie. "no one cares how much you know until they know how much you care"). Don't be a prude. Learn the Hoe Down Throw Down. Be confident, but not cocky. Never speak in a fake accent or you baby talk. Actively listen. Surprise people on their half birthdays. Don't watch TV unless you're at a party. See cool movies as soon as they come out so that you can discuss them freely and recommend them to others. Exercise regularly. Make your name into an acronym. Have a job that others covet. Make everyone around you feel good.

Those are just a few ideas. I'm not saying that you don't do those things, I'm just letting you know that that's what it takes to be awesome.


I had completely forgotten about this and reading it again made me laugh out loud. I hope I'm still as awesome as I was in 2010, but if I'm not at least I have some good advice from 26 year old Ben on how to become awesome. However, I would pass on the advice about getting my nails done.
Posted by Ben at 9:10 PM 3 comments:

My roommate moved out three weeks ago and since then I’ve been living alone. Anyone who remembers mid-2000’s Ben will recall that I hated be alone – absolutely hated it. When I attended BYU I wouldn’t even go grocery shopping by myself. Being alone just wasn’t my thing. But then I graduated from BYU and spent the summer of 2008 doing an internship in Mexico. I didn’t have a ton of friends there and I learned the joy of going on walks and riding my bike by myself. And exploring Portugal alone was such a blast, too. It’s nice to have me time and just think sometimes. However, this is the first time I’ve ever lived alone and I’m learning some interesting things about myself.

First of all, I’m not a dirty or messy person by nature, but I am disorganized. Now that I live alone I leave a lot more stuff out. I just don't see the point of putting something away if it's already where I'm going to use it the next time I need it. For example, when I get home from grocery shopping I put everything that needs to be refrigerated in the refrigerator and leave the rest of the food on the kitchen table. There’s not really any need to hide it in a cupboard since I’m just going to be using it on the table anyway. Cut out the middle man, right? Hopefully I don't live alone for too long so that this whole leave-everything-out business doesn't become an unbreakable habit.

I've learned that when you live alone the only door that ever needs to be shut is the front door. All other doors no longer serve a purpose.

I’ve learned that it’s not the number of dishes in the sink that reminds me to load the dishwasher; it’s the height of the dishes in the sink. For example, I barely notice a few plates in the sink because they don’t stack up very high. But add in some bowls and that dish pile grows pretty fast (especially when a plate is placed on top of a bowl). Things get really bad when I make waffles (roughly twice a week) because I use a big bowl for the waffle mix. Boy does that fill up the sink fast. And then I do the dishes.

I don’t seem to generate much trash alone. On Sunday night I went to move the trashcan out to the street and it was completely empty. I then looked around the house and none of the trashcans needed to be emptied. I emptied one anyway because there was a banana peel in it.

I've learned that I'm a much more pleasant cleaner. I don't think my last roommate every cleaned the bathroom so every time I had to clean it I was always slightly annoyed. But now that I'm living alone I know that any mess is my fault which makes cleaning the toilet much less annoying. Also, even though the kitchen is more cluttered, it's cleaner now because I'm more likely to clean up my own mess than someone else's.

It’s nice to not have to worry about being in someone else’s way, but I really miss living with someone. It’s kind of sad to come home and have no one to talk to. I definitely don’t prefer living alone and I’m glad that I’ll be moving out in June and will once again enjoy human interaction. One perk to living alone is that I have music on all the time. Every day is a me party.

Note: I still make my bed every day. 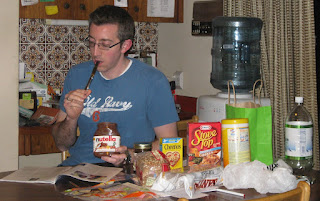 Oh yeah, I forgot to mention that I know read the Ensign while eating Nutella from the jar with a butter knife. Yeah, this living alone thing isn't super-healthy for me.
Posted by Ben at 9:44 PM 5 comments: