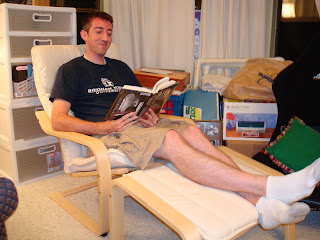 I've decided to start a blog. Joleen and Aubrey were the ones that gave me the idea. They told me that they would enjoy reading my blog so I promised to write one. At least I know that two people will read what I write. I plan to just write about the funny and inspiring things that happen to me and leave all of my philosophizing and whining to my journal.

I recently heard some friends planning a mysterious outing known as "Operation Boulder." They refused to tell me what it was about (even though I later found out) and I was jealous enough to plan my own operation - Operation Sweden. On Monday Megan and I braved 45 minutes on the freeway to go to Ikea to buy a chair that I've been coveting for years. Ikea is HUGE, but miraculously the first piece of furniture that we saw in the store was the exact chair that I wanted. Despite finding it so easily it took us nearly twenty minutes in the warehouse to figure out how to actually buy the thing. I now have it at home and it's great. Operation Sweden was a monumental success!

I took a girl on a date to Deception Pass (a very large bridge) on Saturday. As we were getting out of the car to walk across the bridge she asked, "Should I wear my hat?" and I told her that she should. I really had no opinion and just answered the question with the first answer that popped into my head. As we were crossing the bridge a very large truck zoomed by causing enough wind to blow my date's hat off. Together we watched it gently drift into the ocean. I didn't know how to appropriately console a girl who had just lost her hat. The first thing I managed to say was, "I can't believe that just happened." Actually, I CAN believe that that happened.
Posted by Ben at 10:53 PM

Hooray! A blog. And I remember sitting in that chair at IKEA in Utah on our way to drop you off at the airport. I'm glad you finally got it :)

Thank you! My life is now complete!

I found your blog. As I was standing in the shower yesterday I thought, "boy do I love washing.........ton." Too bad I have to be here in Utah.

The hat blowing off must have been a metaphor for the girl's emotions while she was on the date with you. She was completely blown away, then drowned in the depths of the swelling and powerful tides of your love. Keep up the good work! P.S. I deleted my blog because I didn't make girl's a contraction the first time around. I was embarrassed.

Ben, this post is old. Tell us about your students. Which ones are the suck ups? Who has a brown nose?

I love that you have a blog!...so do Mitch and I...although it's not really Mitch's, it's mainly just mine...but I guess I have to share because we're married.