Take an item, leave an item

My good friend Jordan drove down from Salt Lake for one last visit before I head off to Portugal. We went to this cool art exhibit at the HFAC where you take one of the items on display and replace it with an item of equal value. That’s the idea, but people apparently are a little cheap since some of the items there now are candy wrappers, pieces of paper, and half used bottle of Pepto Bismol. We took my old license plate. 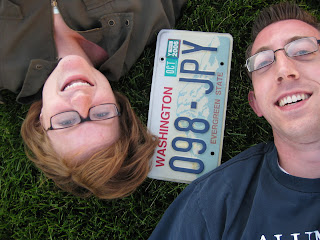 We exchanged the license plate for a VHS that didn’t have a label. We took it over to the library to watch it and Jordan noticed some posters that she designed a few years ago. They’re pretty faded, but they’re still there. 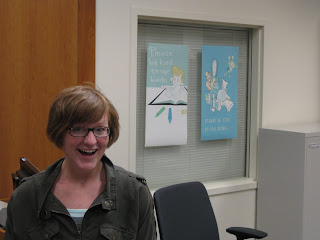 We had no idea what was on the video. 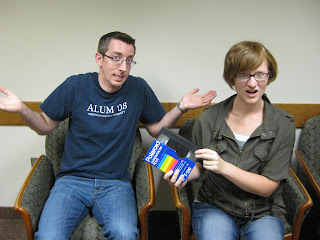 When we played it, we discovered that it was a tape of a boy asking a girl to prom. It was kind of weird and he did a lot of random impressions. I don’t know if Tyler and Kimberly went to the dance together, but I’m assuming that they’re not together now since Kimberly gave the tape away. 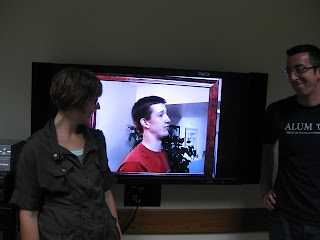 With the mystery of the unlabeled VHS solved, we headed back to the exhibit and traded the VHS for a slightly tacky hair clip that Jordan wore with style. 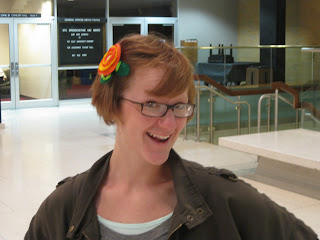 We then went to Starbucks to use a $10 gift card that I’ve had for five years. I would have used it sooner, but I didn't know of any Starbucks in Utah Valley. It turns out there's one in Orem. While the hot chocolate and pumpkin bread were delicious, I don’t think they were worth $10.
Posted by Ben at 11:40 PM

I'm slightly sad that our one last time together has not yet been documented. That art exhibit sounds pretty sweet. Almost as sweet as the delicious enchiladas I made you and the garden plot you fell in love with :)

Ben, I hope you blog while you are in Portugal!

Sorry, Joleen, but I didn't take my camera the last time we hung out. And it was a blast even though I didn't blog about it. Chantelle, I will most definitely be blogging in Portugal.

Joleen will always be jealous of me, ever since we had the same boyfriend. 'Nuff said. :)

So true, Jordan. So true. I want everything you can't have :)