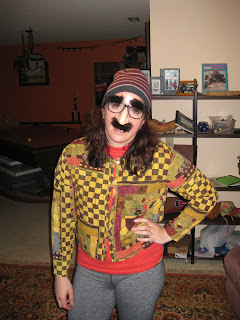 My sister Lindsay and I have a good brother-sister relationship. She had to drive down to my neck of the woods on Saturday so I told her to drive down on Friday night and we could have a sleepover. There was also a Halloween dance at church that I told her we should go to. Apparently when I told Lindsay about the dance I called it a “party” and so she thought that we would only be attending a party -- no dancing involved. I’m not big fan of dances and Lindsay can barely tolerate them so she was disappointed by my accidentally misleading her. But still, she was a good sport and went anyway.

Since we were going to a Halloween dance we had to dress up. I dressed up as a planeteer (if you don’t know what that is click here), but Lindsay didn’t have costume so we started brainstorming what she could be. I have a closet in my bedroom, but I’m only able to use half of it because the other half has Kris’s clothes in it. I said, “Hey, I’ve a whole closet full of women’s clothes! I’m sure we can find something in there.” Not quite sure what she’d be dressed up as, we found a sweet green suit jacket and a hip skirt. 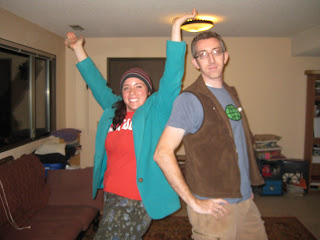 However, despite the awesomeness of the outfit, Lindsay decided to opt out of wearing it. I was then struck with another flash of genius. “Hey,” I nearly shouted, “Kris has a whole box of funny glasses. You could pick a pair and wear them to the dance. The only problem is I don’t know where they are.” After 10 seconds of searching I shouted to Lindsay who was in a different room, “I found them! Oddly enough they’re in a box labeled ‘funny glasses.’” 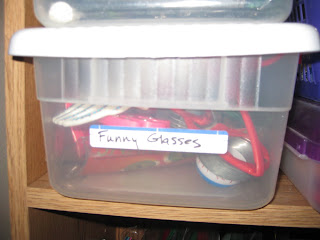 She tried on a pair and decided to go to the dance as diva. Even though I looked awesome, I decided not to go as Jimmy Durante. 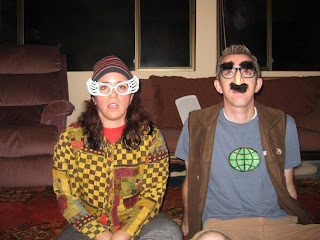 Both Lindsay and I don’t really like dances, but we had fun chatting with people. I did feel kind of crotchety when people would say to me in the hallway, “Why aren’t you in the dance?” and I’d reply, “I don’t like loud music.” We did manage to dance for a little while, though and I learned what it means to Bernie and how to do the Dougie. And I was able to snag loads of free candy. Ever time I passed the candy bowl I’d furtively stuff a piece or two into my pockets so as not to arouse suspicion. I came away with quite the stash (not to be confused with a “stache” which I did not come away with). 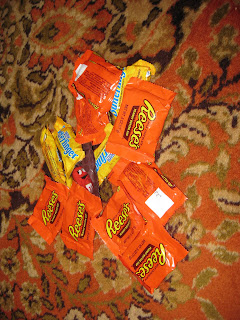 Lindsay and I ended the night watching the new episode of Community while lying on my bed. It was the best Lindsayween ever!
Posted by Ben at 5:27 PM

Based on costume, it seems to me like you went as the Scandinavian chick...

I love Lindsay! She's fun! And wow, you had to put 'if you don't know what a Planeteer was, click here' that is crazy talk! Also, I like your candy stash and how there were lots of Reese's in it.

i'm so glad to see you're still blogging. keep up the good work Master Schilaty!

I LOVE that you went as a planeteer! I've lost count of how many people I have had to teach about Captain Planet. So, I must ask you: did you have the power of earth, fire, wind, water, heart or something else entirely?

I totally had the power of fire. Why not, right?

Well I wish you would tell me what a Bernie is and how to do the Dougie.


I, of course, love the recycling push. In case you forgot, I'm a recycling fanatic. Looks like life is treating you well! Thanks for blogging. I miss you and Crown 6!

Word verification of the day: shdur