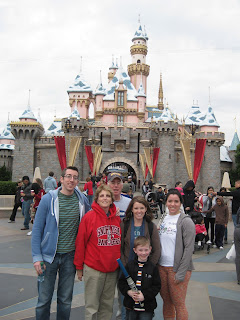 My sister turned 30 over Martin Luther King, Jr. weekend so to celebrate we went to Disneyland. It was a blast. As we were getting ready in the hotel the morning of Lindsay's birthday she said, "I think I'm going to wear my good life experience shirt today." When she said that I assumed she was talking about a shirt that she wore when she had good life experiences, but when she put it on I say that it was just a shirt for the band The Goodlife Experience. We also created some new inside jokes. My favorite is dancing like a turtle. There are some turtles in the new Little Mermaid ride that have some really awesome moves and we recreated those moves daily. We got pretty good at it. 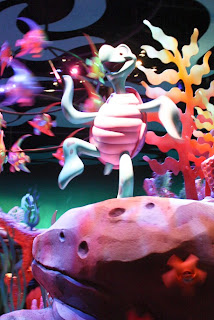 Lindsay and I were so excited to be at Disneyland that we clicked our heels. We're really just big kids. 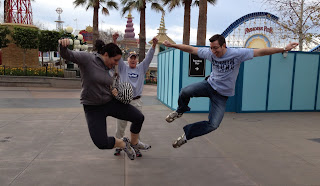 Lindsay insisted that we get real Mexican food for her birthday dinner. I asked a Hispanic cast member at Disneyland where we could get authentic Mexican food near the park. She said, “Real Mexican food? By Disneyland? There isn’t any.” She recommended a place called Los Sanchez about 10 minutes away. We followed her sage advice and it was good (we were the only non-Hispanics in the place). They had the whole restaurant sing Happy Birthday to Lindsay and they even gave her a mug that just happened to say “Happy 30th Anniversay” on it. They also had a Mexican mannequin that we took our picture with. There was a sign on him that said: “My name is Mr. Sanchez. You can take your picture with me.” How could we resist? 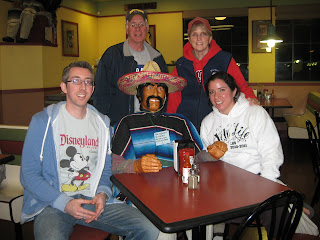 We all love Splash Mountain (except for my mom) and got extremely wet the first time we went on it. That's usually not a problem because we usually go to Disneyland in the summer, but it was really cold and being wet was not fun. Lindsay decided to by a poncho to keep herself dry. I was far too cheap to spend $8.50 on a poncho so when Lindsay bought hers I asked the cashier for a big plastic bag. I cut it up with my keys and used it to shield myself from the water. It worked like a charm. Since it was so cold no one wanted to ride Splash Mountain and we rode it multiple times without waiting at all. Notice how wet we are in the picture. 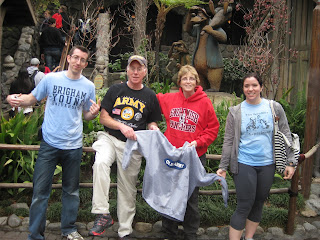 My nephew and sister-in-law came too and it was so fun to have them there. Bowen had never been before and it was great to see how excited he was about everything. When we first saw them the first thing Bowen said to me was, “My birthday’s in five days!” I had expected hello, but that worked too. When you're six birthdays are a big deal. Bowen doesn’t like fast rides, but his mom does. She convinced him to go on a number of rides by saying, “Just try it once and if you don’t like it you don’t have to do it again.” She successfully got him on Space Mountain and Big Thunder Mountain Railroad, but he wised up to her plan and avoided all the other fast rides. We sent Bowen off with grandma while we thrill seeking adults went on the fast rides. 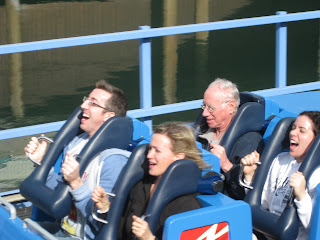 Bowen and I waiting in line at the Toy Story Mania ride. 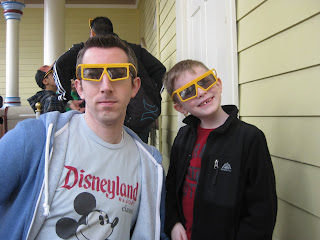 One of my favorite things we did was canoeing on the Rivers of America. Sometimes the simplest things are the best. 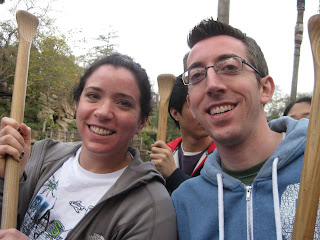 It was such a fun trip and I don't know how I'm going to top it when I turn thirty. Also, I wrote Lindsay a parody song for her birthday. I tried to upload it, but realized that I don't know how to upload videos. It's to the tune of Dynamite by Taio Cruz. Use your imagination.

On a completely unrelated note, my parents stopped by my house briefly yesterday. My dad tripped as he was going down the stairs, tumbled down six stairs, and crashed into the wall before hitting the ground. It was a frightening few seconds before we found out that he was okay. He was pretty lucky and escaped with only bruises. It could have been really bad if he had landed differently, but he’s fine. The wall, however, now has a huge hole in it. 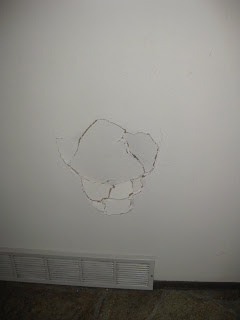 Solving the hole problem turned out to be super-simple. Not only did I cover up the hole, but now I want to go to Brazil. 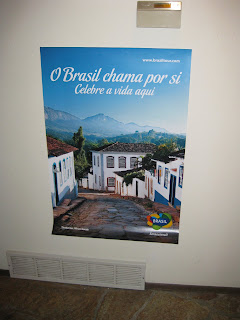 Great pictures, especially the heel-clicking! Too bad you don't know how to upload the video. Somebody's gettin' old...

The Brazil Poster reminds me of a Golf picture we had in the Motel California.