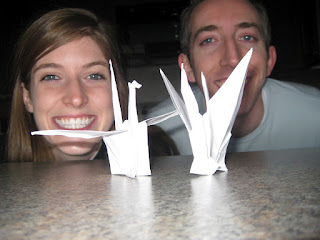 My school district gives us a whole week off for Presidents ’ Day. We call it mid-winter break. Someone from the district explained to me that since it’s so cold and dreary this time of year they decided to give everyone a week off from school to get out of the state. I’m not complaining. When I didn’t quite make it to Utah in September I told my friends that I’d come hang out with them in February and that’s just what I did. After six years of living in Utah there were a lot of people I wanted to visit. Most of what I did in Utah, while it was a blast for me, probably wouldn’t be too fun to read about so I’ll just write one story.

In the summer of 2010 I worked as a counselor at a summer camp at BYU called Especially For Youth. One of the female counselors there was quite attractive and seemed really cool. She was totally my C.O.W. (crush of the week). I had decided to ask her out at our Saturday counselor meeting, but when Saturday rolled around I found out that she had had to leave for Logan and wouldn’t be returning that summer. I was bummed and decided to send her a Facebook message telling her about my week, asking about hers, and mostly just trying to break the ice and become friends. 18 months later she responded to my message. That’s right, 18 months! The same amount of time it would take to bring two human babies to full term. By that time she responded I had pretty much forgotten about her and was rather surprised to be hearing from her at all.

It turns out that the EFY girl now lives in Salt Lake and is good friends with my friend Jordan. Somehow they both figured out that they knew me which reminded EFY girl that she needed to respond to that message I had written her in 2010. Jordan picked me up at the airport last Saturday and we were going to hang out in Salt Lake that afternoon. Much to my surprise EFY girl wanted to hang out with us, too. So Jordan, EFY girl, Courtlin, Amanda, and I spent the afternoon together.

I wasn’t really sure how I was supposed to greet EFY girl when I saw her. We hadn’t really been friends before and she had ignored me for 18 months. Should I act happy to see her? Should I act like I’m too cool to be her friend? In the end I decided to be nice and polite (you know, my usual self). The five of us went to the Texas Roadhouse for dinner which is a restaurant that Washington really needs to get. We had to wait an hour to be seated and part of that time was spent waiting outside. It was kind of cold so we had miniature dance party outside. I created a new dance that consists of swinging your slightly bent knees in a complete circle going clockwise and then counterclockwise. Repeat this action multiple times and it kind of looks like you’re dancing (and it keeps you warm). Also, since there were a lot of people waiting we decided to cheer for the other groups when their number was called to be seated. It made us less envious of them for being fed before us. The evening was fun and I remembered why EFY girl had been my C.O.W. I wanted to hate her, but she was undeniably cool.

I didn’t expect to ever see EFY girl again, but Jordan encouraged me to invite her to hang out with me that week. I called her up on Sunday and invited her to go on a date with me the next day. I didn’t have a car and I was in Provo so she would have to drive all the way down from Salt Lake to hang out with me. She agreed and we went out Monday morning. We went to Kneaders for breakfast which was incredibly good, but it was packed and we had to eat outside (not so good). Then we went to the Museum of Art at BYU and went back to my house to learn out to make paper cranes. It seemed like a very BYU-style date and was a lot of fun. Our paper cranes didn’t turn out too well. Mine was a little lopsided and hers looked more like a pterodactyl. I don’t think EFY girl and I will fall in love due to the 900 miles that currently separate us, but her driving down to Provo to hang out with me totally makes up for the 18 months of pretending that I didn’t exist.

I did a lot of other stuff in Provo, but it was mostly hanging out with old friends and it was a blast. I love to travel and see new places, but I’d rather hang out with awesome people any day.
Posted by Ben at 9:59 PM

She's cute. Maybe she was on a mission?

I'm glad you had fun in UT. COW...haven't heard that in a long time. :) I must say the paper crane is kind of sad. I do know how to make them, and I will have to teach you the art of making a balanced crane. Also, I now know how to make an origami boat if you want to have boat races for a date. :)