March was awful, really awful. I didn’t blog much during March because the only thing I could think to write about was complaints about my job. I was trying hard to be a good teacher and I just felt like I was constantly failing. My outlook has improved lately so I’d like to share some fun stories from school.

I have one student who always gives me high fives. One day he raised his hand to ask a question and I walked over to him and gave him a high five instead. He laughed and said, “No, I have a question.” His hand was still in the air so I gave him another high five and then another. Another student yelled, “Hold up both hands!” thinking that that would get me to stop high fiving and finally answer the boy's question. So the high fiving student held up both hands and I gave him a high ten. After that I felt like I’d annoyed my student enough and I answered his question.

One of my classes constantly asks me who my favorite student is. This sort of dialogue always interests me so I kind of fan the flames more than I should. For instance, when someone is absent I’ll often say, “So-and-so isn’t here? But she’s my favorite student?” That usually leads to an outraged student saying, “She’s your favorite!? What about me?” I usually respond by shrugging my shoulders and saying, “Sorry,” as if I had nothing to do with selecting my favorite student.

I was in a good mood this week and decided to fan the flames a bit more. I told the class that they would be voting for my favorite student. They each got to write who they thought my favorite student should be on a piece of paper and they were not allowed to vote for themselves. As I expected most of the ballots were jokes and my favorite student is now a kid who consistently tries to be annoying. I was 95% sure that that particular student would be selected before we voted so I was prepared for the outcome. It was a fun few minutes.

On an unrelated note, I was accepted to a PhD program at the University of Arizona which means that I’ll be packing up and moving to Tucson in August. When I first started telling people my good news a common reaction was, “Aren’t you just jumping up and down with excitement?” and I’d respond by saying, “Yeah, but I’m not jumping.” I really am excited, but I also realize that it’s going to be a ton of work. Also, I’ve moved a lot in the past and the idea of packing all my stuff into my car again is less than thrilling. And I'm really going to miss my family and friends here in Washington. But still, this is what I want to do and it’ll all be worth it. 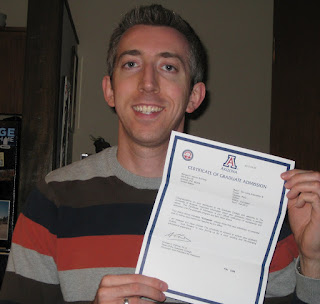 One last thing: this is the view from my deck. I love living in a beautiful place. 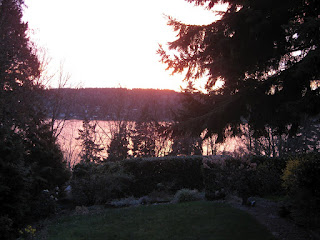 That's so exciting! Congrats on your acceptance to AZ. We'll be up in WA by the end of May so we'll have to try and hang out a few times before you leave.

Am I your favorite person? Unfortunately I am not a student so I can't get the chief award.

1) I should really read your blog more often because I always love it when I do.

2) Oh no! I obviously need to visit you before August.

And the word verification of the day is:
gedolit tetside