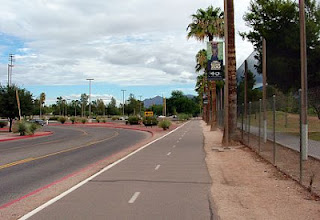 Running in Tucson has proven to be rather difficult for me.  It’s been so freakin’ hot here that running in the middle of the day is out of the question.  I could run in the early morning, but anyone who knows me well knows that I am not a morning person (I had one roommate who would always enthusiastically say, “Good morning!” and I’d always groggily reply, “What’s good about it?”).  I’ve tried to get up early a few times to run, but it just doesn’t work.  I usually run at night when it’s hot in the summers, but Tucson is super-scary.  My friends from the Phoenix area have described Tucson as “sketchy,” “ghetto,” and “usually five degrees cooler than Phoenix” (the last one is a good thing).  I’ve been told that since there are observatories in the area there is a light ordinance in Tucson to prevent light pollution.  My neighborhood has some unsavory people living in it and I would not feel comfortable running through my poorly lit barrio at night.  So instead, I go running at Reid Park which is well-lit and has a bike/jogging trial. 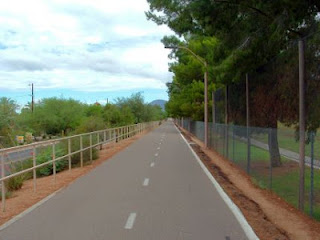 As I drove up to Reid Park on Saturday night I saw a sign that said: “BEER FESTIVAL OCT 6.”  I got to the park at 10:00 pm just as the beer festival was ending.  Usually at that hour the park is mostly deserted with only a handful of people running and few shady characters talking in the dark areas of the parking lot, mostly likely dealing drugs.  But on Saturday night there were a TON of people there, many of them drunk.  It made for an interesting run.

When I run I occasionally get catcalls from random people.  It’s rare, but it happens.  On Saturday at least two dozen people yelled at me.  Most of the catcalls were nonsensical things like “AHHHH!” or “EHHHH!” but I did get a few sentences like “YOU’RE RUNNING!”  and “IT’S LATE!”  and other things that a good Mormon boy wouldn't repeat.  Whenever someone would yell something encouraging I would do a raise-the-roof motion with my hands as I continued my run which usually resulted in laughter and more yelling.  There’s one section of the trail where I have to double back and I ran by the same drunk people twice.  They yelled more the second time.  I could smell alcohol in the air.

Drunk people don’t tend to think super-clearly and I saw one guy whizzing behind a palm tree.  The restrooms were less than 50 yards away.

As I was running by a different guy he suddenly lurched toward me and I was momentarily worried that he was going to shank me.  Then I realized that I don’t ever use the word shank and getting shanked isn’t a regular fear of mine.  He was simply stumbling and I just happened to be in the direction of his stumble.  Luckily I escaped unstabbed.  Another guy almost ran into me while walking his bike.

All in all, it was a much more exciting run than normal.  And on a running note, I have greatly improved since I got to Tucson.  Before I could barely run two miles in my minimalist shoes, but now I can run four.  I'm hoping that using minimalist shoes will move my legs from the "skinny" category into the "sexy" category.  But it may just be a pipe dream.

Note: at no point during my run on Saturday night was I drunk, nor have I ever been drunk.

Please don't get shanked :) We love you too much. Glad to hear that you're still running!