Kevin and I went to California last weekend to visit Allison.  She was on spring break last week and she and her former roommate Brooklyn were hangin' out in SoCal.  Anyone with half a brain (luckily I have a whole brain) would have realized that Allison and Kevin would be spending all of their time together which meant that Brooklyn and I by default would be on a weekend long double date (we went Dutch).  I'd met Brooklyn before, but we were acquaintances at best.  When Kevin and I arrived at Allison's parents' house on Thursday night I said to Brooklyn, "Well, it looks like it's just you and me for the weekend."  She did not seem impressed, but I think she was just feeling tired.

On Friday morning the four of us set out for Los Angeles and the adventures immediately began.  We first went to Walt Disney Concert Hall which is covered in stainless steel making it very hard to look at when the sun is out.  We learned on the audio tour that Lillian Disney donated $50 million to the project in the 80's.  When asked what she would like the concert hall to look like, she said that she wanted it to be a brick building that looked like a church covered in vines.  Upon hearing this, the head architect said, "I know exactly what she means.  She wants the building to be warm and inviting!"  And so, he covered it in stainless steel.  While I very much like the architecture of the building, I can't help but think that Lillian Disney was being extremely literal with her description.

We then went and saw all of things that I had seen in movies that actually exist in real life.  I was a little giddy.
I particularly liked this historic pun in front of Grauman's Chinese Theater. 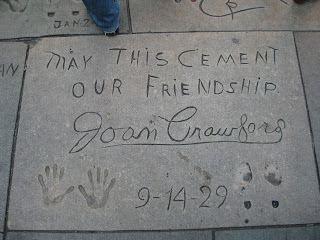 Brooklyn has a degree in theater from BYU and loves musicals.  While we drove around I'd say, "Hey, sing me such-and-such a song," and she would.  The four of us saw Catch Me If You Can and the Pantages.  Kevin had never been to a musical before and don't think he quite understood why they're so awesome.  I later asked him what he really thought of the play and he said, "I'd rather watch the movie."  I, however, preferred the musical -- even though it had less Amy Adams.

The next day we went to the LA temple which was HUGE!  I ran into three people that knew there (two former students and former coworker) and was genuinely surprised that I knew so many people in LA.  In order to get the picture below we set my camera on the LA temple sign.  The angle wasn't right so we propped it up on some quarters, but then if just fell over so we put Kevin's wallet behind it to keep it from falling down.  It worked like charm.

We then went to the Santa Monica beach where it was surprisingly cold and cloudy and Seattle-like.  I got really giddy at the beach and made Brooklyn race me to the end of a boardwalk.  We then had an epic stare down. 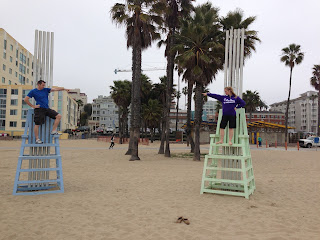 We then went to the Santa Monica pier and made lots of pier puns.

By the end of the weekend Brooklyn and I agreed that we now knew each other enough to feel comfortable accepting a ride from the other person (because you DO NOT get into a car with a stranger).  And Allison and Kevin seemed even more in love which warmed my heart.

Kevin and I bought a lot of junk food for our road trip including multiple kinds of chips, whoppers (the candy, not the burger), twizzlers, skittles, and a coke.  I also brought two tangerines.  When we got back to Tucson on Sunday night we both felt slightly ill from all the junk we'd consumed.  I said, "Let's never eat like that again."  I then baked a pizza and watched the new episode of Once Upon a Time.  It was a great weekend.
Posted by Ben at 2:34 PM

Oh good, the Hollywood sign turned out better than I thought! Thanks for double dating with Brooklyn. You guys a-pier to be quite the pair.

Are you saying that we're a good pair because our bodies resemble the shape of a pear?