The Mystery of the Missing Magnets 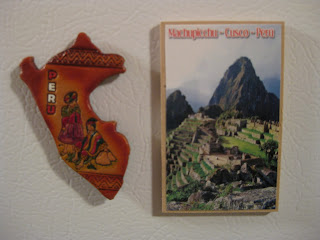 I started a magnet collection in January which is probably the most exciting endeavor I've ever pursued.  The goal is to get a magnet from every place I visit.  Thanks to my latest trip I now have six on my fridge.  I was so excited about my new magnets that when I got back to Tucson I made Kevin come over and look at them while I yelled, "Ta-dah!" and gestured at them.  Kevin was a good sport and acted interested.

Kevin and I have a third roommate who I don't think I've mentioned before on my blog.  I'll call him Todd (to protect the possibly guilty).  Todd spends most of his time in his room with the door closed and Kevin and I don't see him a ton.  In fact, Kevin and Todd almost never talk.  If Kevin is watching TV in the living room and Todd walks into the kitchen they won't even say hi to each other.  During the month I was on vacation Kevin and Todd barely spoke to each other.  I talk to him, but we're not super-close.

I flew into Tucson last Tuesday night and Kevin picked me up at the airport.  I hadn't told Todd that I was coming back and I naively thought he'd be excited to see me since I'd been gone for a whole month.  As I walked to my room passed Todd's closed door I shouted, "Hi, Todd!" and all I got back was a very unenthusiastic, "Hey."  Maybe he hadn't realized I was gone, or maybe I'm not very exciting.  Kevin and I then sat down to watch 30 Rock on Netflix, but the internet was a little slow so Kevin unplugged the router to move it closer to the TV.  As soon as the internet went out Todd emerged from his room saying accusingly, "What happened to the internet?"  He had been playing a game that we had ruined by unplugging the router.  He was forgiving and I got a few minutes to talk to Todd about the computer game he's been playing for hours every day.

The following night Kevin and I were in the living room and I was downloading new podcasts and music on my old laptop for my drive from Arizona to Utah.  The fan on my old laptop broke a few months ago so it overheats quickly (thus why I have a new laptop).  Since it was overheating I would occasionally hold it up to air conditioning duct to cool it down.  Todd emerged from his room as I was holding my laptop up to ceiling.  He looked at me suspending my computer in the air, said, "You're weird," and then left for work.

As I was downloading podcasts I glanced at fridge and noticed that the two magnets I bought in Peru were missing.  I pointed this out to Kevin and he was perplexed, too.  Maybe I hadn't put them up on the fridge?  That didn't make sense because I had made such a big deal about my new magnets that we both remembered seeing them on the fridge.  Maybe Todd's daughter grabbed them when she was visiting?  Nope, they were up way too high for her little hands to reach.  Maybe they had fallen onto the floor and gotten kicked under something?  That's a no go because the house had just been swept and mopped and no magnets had been found.  We were really confused and couldn't figure out where they'd gone and how.

I didn't move the magnets and Kevin didn't move the magnets so it had to be Todd who moved the magnets.  We thought and thought and couldn't figure out why he would have moved just the two magnets from Peru.  Kevin then said, "Do you wanna search his room for the magnets?"  I thought for a moment and then said matter-of-factly, "Yes."  I knew that Kevin wasn't being serious and I didn't actually want to search Todd's room -- I was just calling Kevin's bluff.  We walked to Todd's room, opened the door, and turned on the light.  I was expecting to peek in, say, "oh, no magnets," and leave.  But as I turned on the light I immediately saw my Machu Picchu magnet laying face down on Todd's dresser.  When I grabbed it I saw the other magnet partially hidden under a cloth.  I grabbed that one, too as I said, "What the heck?"  Kevin and I both erupted into confused laughter.

I really like my magnets and I don't want them to disappear so I took the ones we'd recovered from Todd's room and the magnets off the fridge and hide them in one of my drawers.  Kevin and I were trying to figure out why on earth Todd had taken two of my magnets.  Kevin really, really wanted me to ask Todd about them, but I couldn't because if I did I would have to admit that I violated his privacy by going into his room when he was gone (and then I'd look as bad as the NSA).  So we decided to put everything back like it was so that I would be guilty of violating his privacy, but he wouldn't know about it so I'd feel a lot better.  We put the two magnets back on his dresser and put the other magnets back on the fridge.

The next morning left for Utah and I was going to ask Todd about the magnets before I left.  I was going to say something really nonchalant like, "Good morning, Todd.  Did you sleep well?  What are your weekend plans?  Huh, two of my magnets are missing.  Have you seen them?"  Unfortunately, Todd was in his room with the door closed, possibly sleeping, and my nonchalant questioning would have seemed  very chalant through a closed door.  So I left without recovering my magnets and without knowing why they'd been moved.

I asked Kevin to ask Todd about them.  It's been nearly a week since I left Arizona and Kevin hasn't seen Todd since I left so it's still a mystery.  And the magnets haven't been returned to the fridge either.  I worry about them.

I won't be going back to Arizona until August and Todd will have moved out before I get back so I probably won't ever see him again (we're not very close).  That means that the last thing he'll ever say to me was, "You're weird."  Based on my obsession with magnets I'm starting to think that Todd may be right.
Posted by Ben at 9:51 PM