After a few days in Iowa City I hopped on a train in Mt. Pleasant, Iowa and traveled to Chicago. This was my first time traveling by train in the US and I loved it so much I would totally do it again. I wanted to get the full experience so I had a meal in the dining car. Since I was alone I was seated with a man from California, a woman from Mexico, and an annoying man from Alaska. Seemingly out of nowhere the man from Alaska said, “I don’t mean to be rude, but I don’t understand why Mexicans who move to this country don’t want to learn English.” The Mexican woman spoke very good English and looked a little stunned. I replied, “I think most of them do want to learn English, but learning a language takes a lot of time and resources and people who come to the US to work often don’t have as much time to dedicate to learning English as they’d like.” He responded, “No, learning another language is easy.” I then said, “Well, I’m getting a PhD in how people learn second languages and it really does take work to learn a language as an adult.” I wish this story ended with a fruitful discussion of second language acquisition and him apologizing for misjudging a whole group of people, but he was more of a talker than a listener. He just ignored what I said and started talking about something else. But the burger I had was delicious.

When I got to Chicago I learned that my friends Kyle and Mary were just about to leave Chicago by train and we overlapped by 40 minutes. The unexpected reunion was awesome. I stayed with LeAnne for a few days and spent the 4th of July with her and her friends. We watched the Chicago fireworks from a park that felt like a warzone. The park was packed with people setting off their own fireworks and the constant explosions, debris strew fields, and smoky haze made it feel like WWII.
Fun Laura picked me up at LeAnne’s on the July 6th and then we spent a few days visiting her friends in Fort Wayne, Indiana and East Lansing, Michigan. We then hopped over to Canada to drive to Niagara Falls. The drive through southern Ontario was unexpectedly stressful. Laura had some pepper stray with her that they made her surrender at the border. The border agent made it seem like a huge deal that she had brought it. We had both contacted our phone companies and had been told that they would work just fine in Canada, but when we got there they didn’t. Also, I couldn’t figure out how to use the gas pump at first which just made me feel stupid. The drive through Canada really stressed me out and I was so relieved when we got to New York.

We quickly examined Niagara Falls from the US side and then walked back into Canada to see the falls from the other side. After being there for a bit we walked back to the US so we entered and left Canada twice in one day. I’m sure this was super-sad for Canada as we taunted her with our presence, but refused to stay. We stopped on the bridge between the US and Canada to watch the fireworks and they were spectacular.

Laura and I drove to Palmyra, NY the next day to watch the Hill Cumorah Pageant. Laura isn’t LDS so she didn’t care about the pageant, but I’ve been wanting to see it for years and she was kind enough to spend a day with me in the birthplace of Mormonism. I gave her a brief overview of Palmyra history during the drive so she’d know a little about the Hill Cumorah, the Smith Farm, and the Grandin Printing Shop. On the tour of the Printing Shop the missionary giving the tour asked who Joseph’s first scribe for the Book of Mormon was and Laura answered, “His wife!” before any of the Mormons could answer. My little lesson in the car made it look like Laura really knew her stuff. I also ran into one of my former students who is serving a mission there. When she was in my class she wasn’t baptized yet so I had absolutely no idea that she was on a mission and it was so great to see her.


The Hill Cumorah Pageant was super cheesy and I loved it. Laura was a great sport and was kind enough to spend the day doing Mormony things with me. What I found really odd was that some of the missionaries giving tours talked to us like we knew absolutely nothing about Mormonism while others talked to us like we were all Mormons. I really appreciate that Laura was willing to take an entire day doing what I wanted to do and the only time she complained was when I made her climb the Hill Cumorah (it's quite steep).
Laura made us awesome matching t-shirts for the trip. Apparently Korean couples wear matching outfits on their honeymoons so Laura says that we're basically Korean honeymooners. I can't think of any reason why that wouldn't accurately describe us. 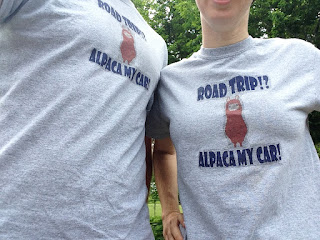 Hey, I went to palmyra this weekend and your former student was my tour guide at both the Smith frame house and the whitmer farm!!!