Last month three friends and I stayed at an Airbnb in Anaheim while spending two days at Disneyland. Our hostess Leena was super nice. She and I chatted a few times about her kids, seeing God’s miracles in her life, and how great it is to live in southern California. The day we left and I packed up my things I had a nagging feeling that I was forgetting something, but I looked under the beds and in the bathroom and there didn’t seem to be anything that I hadn’t packed. It wasn’t until I was back in my house in Arizona that I realized I had left all my dirty clothes in a drawer in California. At first I was super bummed that I had left some of my favorite clothes in another state (I mean you, purple shirt). But I had driven through the night and had not yet slept at all so I crawled into bed figuring I’d address the problem in a few hours.

I texted Leena that afternoon and explained the situation. She was totally understanding and offered to mail my clothes to me and I offered to send her some money for her trouble. All was right with the world. And then a few hours later I got a text from her that she had meant to send to her mom. It read: “So the last bnb guest left a bunch of clothes on accident and asked if I’d mail them. Of course I will but they were dirty so I brought them home to wash the first and all the undies were like really long and the white shirts slightly off. Then I remembered they were a group of four MORMONS. I washed the special undies in my washing machine.”

She immediately realized that she had accidently sent the text to me and I soon received two texts that said, “Oh God, humiliation,” and “Forgive me.” 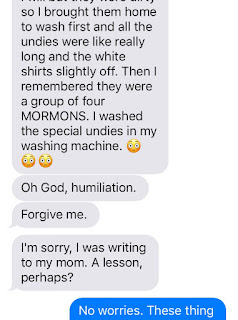 I burst into laughter, of course, but knowing that she was probably feeling mortified I texted her saying not to worry, that I’ve sent the wrong text to people loads of times, and that she needn’t feel embarrassed. I then thought it might be nice to explain why my undies are so weird so I sent her this video from the church with a message that said, “Here’s a quick video on what the clothes mean to us Mormons.” 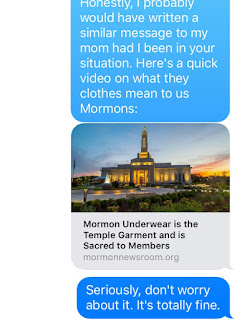 Here’s the rest of our conversation. 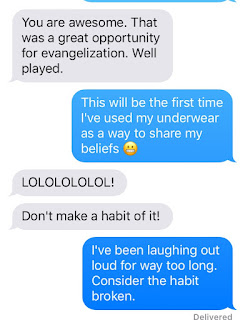 I could not stop laughing and all the hilarity made me feel like this near stranger who had just told her mom about my underwear was a good friend. A few days later I received a package in the mail with all my clothes nicely folded with a note that said, “I’m a mom first so these have been through the wash.” Leaving my clothes in one state and then having them arrive at my house laundered and folded was actually pretty sweet. Laundry by mail should be a thing. 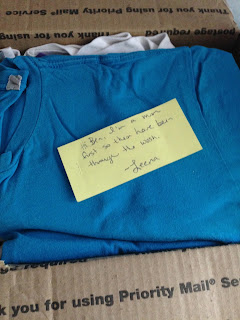 Bahaha that is awesome! Poor Leena, I'm sure she was super embarassed, and probably super glad that the mistake was made with a kind soul (and one with a sense of humor).