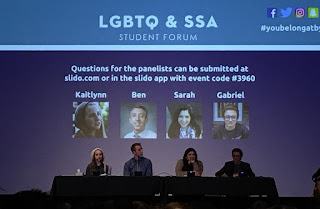 On March 15, 2018, at 12:30 pm something happened that I never dreamed I’d see. I had just spent the last 90 minutes participating on BYU’s LGBTQ & SSA Student Forum panel with Kait Wright, Sarah Langford, and Gabe Cano. Each of these people is a dear friend, and we were selected to represent each of the letters in the acronym LGBT. I was the G. We had all been vulnerable, honest, and hopeful as we answered questions from the audience, not mincing words as we discussed tough experiences. Then, as the panel ended, the completely packed auditorium burst into applause and a sincere standing ovation. As I watched hundreds of people rise from their seats, my eyes welled with tears at this spontaneous gesture.

As I discussed this moment later with my straight friends, some of them explained what it felt like to be in the audience applauding. They said that they applauded the panelists because of our courage to openly share our stories. They were validating our life experiences and our engagement with faith, belief, love, acceptance, and contradiction. They were celebrating us because of the courage it takes to not give up or feel bitter while reconciling our faith and our unique circumstances.

Later that day I read some news stories about the event, including one from The Salt Lake Tribune. I was deeply disappointed by the content of the article. It focused on the negative things the panelists said while completely leaving out the good. I felt misrepresented. Part of the article stated, “Ben Schilaty is still figuring it out,” referring to my connection to God. I don’t recall saying that, and that’s definitely not how I feel. A number of people who were at the panel told me that the synopsis in the Trib did not reflect the feeling or message of the event.

There were so many beautiful moments that captured the essence of what we were trying to share. Moving messages, like when Gabe recounted his mission companion’s response, when he opened up about his feelings, “You know, we’re walking on holy ground.” The whole student forum felt like holy ground. Or Sarah explaining her mother’s beautiful acceptance of her as a teenager, telling her she didn’t need to label herself. Or the story I shared of the extremely positive responses I received from my students in the Spanish class I teach on campus when I came out to them last semester. Or the inspiring things that Kait said, like how sharing authentic stories is part of building the Kingdom of God.

The behind-the-scenes stories deserve to be told, too. Liza (who uses the plural pronouns they, them, theirs) opened the panel and constantly referred to their “team.” Liza’s team was dozens and dozens of LGBTQ students who wanted to see this panel happen. These students passed out flyers in the cold, and many of them came to the panel wearing rainbow shirts with name tags that said, “I’m gay! Ask me questions!” This event could not have happened without the work that so many students did to put it on. They deserve to be honored for their work. And Liza coordinated almost 100% of it all. Liza got a much-deserved standing ovation for all their work. Liza and their team are my heroes.

During the panel, three lesbian members of Liza’s team sat in the front row just 10 feet from me. I know them well, and I know that they are no longer sure what they believe about the church. Whenever a panelist said a comment they really liked, they would raise their hands in the air and snap, demonstrating their approval. After the panel, they asked if their snapping was distracting. I said, “I actually appreciated it. I’m super Mormon, and it was nice to know that you were agreeing with what I was saying. I’m sorry that I’m so churchy all the time.” One of them put her hand on my arm and said, “We love that you’re so Mormon, Ben. You be you.” While our belief systems may currently differ, they respected me enough to celebrate mine.

This event couldn’t have happened without a number of stars aligning. Many of those stars were school administrators who, after taking the time to understand us, worked tirelessly for this event to take place so the campus community could hear our life experiences. Two weeks ago, we had a tense few days trying to make a decision relating to the forum. One of the administrators invited all of us over to his house on a Sunday night. A dozen of us LGBTQ students chatted for about two hours with him until we came to a decision on what to do. He showed us a picture his six-year-old daughter drew that day that included a rainbow. She said she drew it because she knew some of daddy’s friends love rainbows and because they make her happy. The story I see from this event isn’t that BYU treats gay students poorly, but that a BYU administrator gave hours upon hours of his time for this event to happen. He has become a dear friend through this process to many of us. 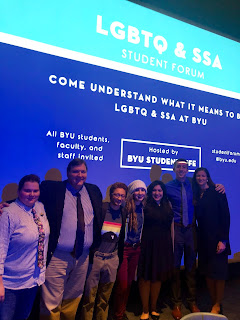 While I was waiting my turn to answer the last question on the panel I got a strong impression to tell the audience that this event wouldn’t have happened without the support and help of administrators at BYU. Then, like a dummy, I totally forgot to mention them in my closing remarks. As the last two panelists spoke, I felt a pit in my stomach knowing that I had missed an important prompting. As one of the moderators was sharing her final thoughts, Sarah leaned over to me and said, “I feel like we need to say something about the work the administrators have done to make this happen.” Incredibly relieved I said, “I just felt the exact same prompting!” Sarah replied, “By the mouth of two of three witnesses.” As soon as the moderator finished speaking, Sarah turned on her mic and explained to the room, “I felt really compelled to say this. I need all of you to know in this room that Liz [Darger] and Steve [Smith] are just a small sample of the administration and faculty and staff here at BYU that are doing everything they possibly can to make this a better place for the LGBTQ members here at BYU. I am a witness that there are people here advocating for you at every level of this university and that you can trust them. And I just wanted to say thank you publicly.” That was the message the Holy Ghost wanted everyone present to hear, and I’m thankful that Sarah had the courage to say something.

One of the last moments of the event was when Liza Holdaway asked anyone in the room who identified as LGBTQ or same-sex attracted, and who felt comfortable doing so, to stand. Probably about a fifth of the room stood, nearly 100 people, and the audience erupted into applause. I nearly burst into tears watching my straight peers clap for my LGBTQ & SSA family. How on earth did that moment not make it into the news? Liza was quoted in the Salt Lake Tribune as saying, “LGBT and [same-sex-attracted] students don’t only exist at the BYU, they belong at BYU.” I felt the truthfulness of their words as I watched the applause.

Straight members of the audiences applauded, I later learned, for the courage it took to stand up and be seen. There was a recognition that everyone wouldn’t be walking out the doors that day with the same beliefs and understanding, but that there would continue to be a diversity of experiences and opinions. However, the LGBTQ & SSA students left feeling loved, validated, and a little better understood. I believe it was a healing evening for students who no longer wish to engage in Mormonism. There was an understanding that day that, until we see each other as brothers and sisters, we’re not yet where we need to be. This event felt like that start of a campus-wide conversation that will continue to happen.

The world hasn’t felt different to me yet. My world feels pretty much the same. And yet it’s not the same. The campus community at BYU is having a conversation that I have not really seen happen before. I can’t wait to see what having this conversation will do for all of us, as we listen to and love and serve each other as individuals. There’s more real news to come.
Posted by Ben at 3:00 PM

I feel incredibly honored to know three of you personally. Kait and I interned together at the State Hospital, Gabe lived in my dorm hallway freshman year, and you're my social work buddy!

Ben, I just read your op-ed in the Salt Lake Tribune, and want to congratulate you for your bravery and what you and others are trying to do at BYU, and therefore, in the Church generally. I am a 70-year old gay Mormon who has chosen to remain celibate. Being from that generation was very difficult and the life experiences of people 40 and older are very different from the openness that today's young people are experiencing. I think that is largely because of brave young men and women like yourself who are willing to stand up and be counted and no longer have to hide in the closet. I am more open about my sexuality today because of the freedom that your generation has enabled, and I appreciate your example. I don't know how things will go in the future, but if those who are promoting the "It Gets Better" movement are right, I think that is also going to be true in the Church. I don't expect the doctrine or the policies to ever change to the extent that gay members will enjoy the full blessings of temple marriage or the acceptance of gay marriage, but I believe the time will come when gay people will be more fully embraced, recognized, accepted and feel genuinely a part of the Church. Thanks for being modern-day pioneers in living worthy lives while enduring the challenges that life has given you.

I feel honored and blessed to lean on the words and actions of so many brave human beings as I seek for personal understanding.

Love this post. So glad things are changing at BYU. Love your writing.