The Place Where I Found the Courage to Be Me 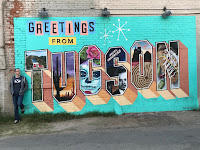 Last year after giving a presentation at BYU on the LGBTQ & SSA student experience at BYU, a professor came up to me and asked what it was that made me love Tucson so much. I said, “Tucson is beautiful. It’s basically surrounded by national and state parks. But I love it because of the people. Some of the finest people on the planet live in Tucson. And it’s the first place I was able to be myself.”

I’ll be giving a fireside in Tucson this coming Sunday and I’m super pumped about it. Not only because I’ll get to see some wonderful friends, but because I’ll get to talk about my faith in the place where it really matured. If you're in the area, I'd love to see you. 7:00 pm at 939 W Chapala Dr, Tucson, AZ.

Tucson is the first place that I was asked to talk openly about my sexual orientation. Brother Bauer asked me to take ten minutes of our Institute class to share my story with a dozen of my classmates. I had no idea then that I would talk to way more people in the coming years.

Tucson is the place where I first gave a talk about my faith and my sexuality. When I walked up to the pulpit I said, “I was asked to give a talk about my experiences as a gay member of the Church, but I’m actually here to talk about the Atonement of Jesus Christ.” Later in the talk I first uttered a phrase that I have now repeated many hundreds of times: “I used to think the Atonement of Jesus Christ was supposed to make me straight, but instead it healed my broken heart.”

Tucson is the place where I started I support group for LGBTQ Latter-day Saints. And the members of that group became my family. I still think that’s the best thing I’ve ever done. I did it for others, but I really needed those people in my life.


Tucson is the place where I learned that I wouldn’t be treated differently if people knew I was gay.

Tucson is the place where leaders stuck their necks out for me in order to elevate my voice.

Tucson is the place where I first came out to ward members. I hadn’t planned it, but I told the whole Elders Quorum while teaching a lesson. A member of the bishopric told me months later that he watched me closely after the lesson ended. He said that I let out a deep sigh when I sat in my chair and that he saw a visible weight lift off of me.

Tucson is the place where I learned that I could be openly gay and still be trusted to hold a prominent calling.

Tucson is the place where I learned that sharing my story was empowering to others.

Tucson is the place where I met the baby who was middle named after me.

Tucson is the place where I almost left the Church. On a day when I just couldn’t sit in church and was ready to storm out, my friend sitting next to me told me not to go. She said, “Just come to Primary with me today.” I spent two hours sitting on a chair that was too small singing Primary songs in Spanish. And my heart healed and I knew I needed to stay.

Tucson is the place where I was shown so much kindness after coming out. Where I came out to my whole congregation unexpectedly and then my branch president hugged me in front of everyone and told them I was his hero.

Tucson is the place where I stopped making decisions based on fear.

Tucson is the place where I came out to my new ward and I received messages from strangers who would become dear friends telling me they loved me and wanted me in their congregation.

Tucson is the place where I learned to trust God’s plan for me, even if it meant leaving a place that I loved so much to move to a state that I didn’t want to live in to get yet another degree.

Tucson is the place that has most felt like Zion to me. My last Sunday in the city the Tucson Arizona Temple was dedicated. I drove my dear friend Georgina to the dedication and we both cried as we waved white handkerchiefs in the air and shouted “Hosanna!”

A few days later I had my last dinner in Tucson at Kevin’s parents’ house. I’d had dinner there hundreds of times during the five years I lived there. I had envisioned the moment that I would walk away from their house by myself and close their gate behind me for the last time as a regular visitor. I imagined I would burst into tears because I so didn’t want to leave. But when the time came to
actually walk away, I felt my shoulders square and, instead of being filled with sadness, I closed the gate behind me filled with gratitude and peace.

The next morning I drove away from the city with my car stuffed with my belongings. The car that my dad had given me when I moved to Tucson because he didn’t want my old car to break down in the middle of the desert. As the sun came over the mountains I once again felt peace and gratitude. I said an audible “Thank you” to the place that had done so much for me and I drove on to the next adventure.

Tucson is also the place where I learned the correct pronunciation of the word saguaro. And what a beautiful word it is!
Posted by Ben at 6:51 AM

Tucson is the best! Thank you for sharing :) There is something about this city and the people here that also gave me a chance to just be myself, and introduced me to some of the best friends I will ever have.

We loved your talk, Ben. We took all our older kids (over 12), and we each learned valuable lessons. Best of luck!

I miss Tucson so much! I'm in BYUI for school but my best friend went to the fireside and told me how good it was! you really are her hero :)