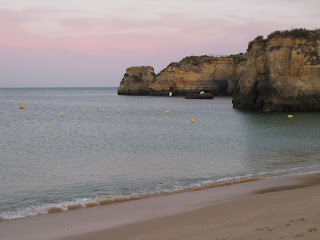 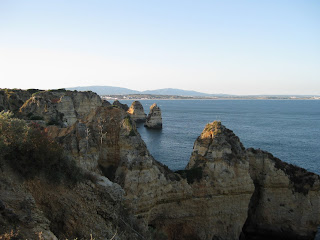 I remember very clearly the first time I met Ashlee and Ariel. I met Ariel the first day of Spanish syntax class. At the time, if you had told me that we’d become super-good friends I would have said you were crazy. Who would have thought that I’d become friends with a 19 year old who takes syntax classes for fun? I met Ashlee around the same time in an Old Testament class. We were both going to audit the class, but neither of us ended up going much. In short, the three of us are great friends. I’ve had almost all of my class with them for a over a year and we share an office together and seeing them again has been great.

We met up on Monday in Lagos on the southern coast of Portugal. I got there a day early and did a lot of reading. Once we met up we made lots of linguistic jokes that few people would understand and fewer people would laugh at, but we did. The best part of the trip was the swimming. Lagos has some awesome sea cliffs and we went swimming around the cliffs and under arches and a man driving a boat blew a conch shell at us and it was spectacular. Definitely the coolest thing I’ve done in Portugal so far and one of the most beautiful places I’ve ever been. I wish I had had a waterproof camera so you could see what I saw.

After swimming we went on walk along the cliff ridge. We thought it was going to be a leisurely walk, but it ended up being more of a hike and we were pretty tired at the end. We walked down this long staircase to the sea and there was a sign advertising grotto tours in four languages. Apparently the way to say “grotto tour” in German is Grottenfahrt. That has become our new favorite word of the trip. That, and the fact that I say “kabab” like a British person and they say it the “right” way. The timer on my camera was a little quicker than Ariel. 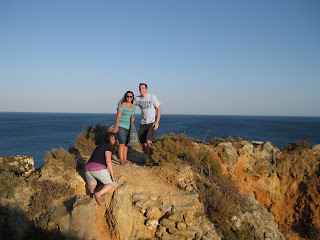 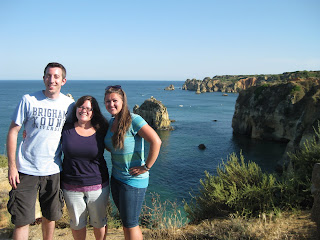 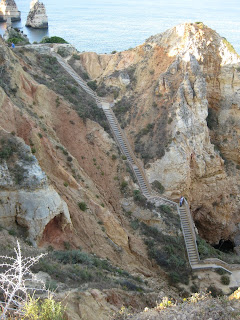 This morning there wasn’t time to go swimming so we just wandered around town. All the sights cost money and we didn’t feel like paying because nothing was interesting enough to warrant payment. But we did get a funny picture outside of the slave museum. 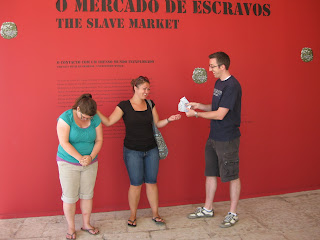 All in all, I’m so glad that Ashlee and Ariel are here and I’m glad that we have even more Portuguese adventures planned for the rest of the week in Lisbon and Braga.
Posted by Ben at 2:11 PM

That looks fantastic and I'm super jealous. Glad you're having so much fun! Now I want to go to Portugal... I just need to pay off my China debt first.

Selling me was my punishment for not making it on top of that hill in time for the picture and for bringing such a heavy bag, isn't it?

I'm glad that we have been able to enjoy both nerdy and not so nerdy jokes. Even though you prefer pedagogy to linguistics.