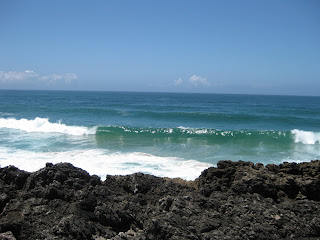 I got moved up to the Advanced 2 class! I really like it. My teacher’s name is David and he’s tall and thin so I already feel a special bond with him. Are bond would be even stronger if he didn’t have a goatee. I also like his teaching style more than Maria’s, but I still get bored in class. What can I say, it’s hard to be as good as Ana. I do, however, really like hearing a man speak because I feel kind of dumb trying to use a Portuguese accent sometimes and it’s nice to know that men actually do talk like that. Here’s what makes me feel dumb: every syllable final s is pronounced like sh in European Portuguese. That means that the word estás is actually pronounced eshtásh. I hate it because it’s more work and sounds silly. But that’s how they talk and I have to do it. Sometimes when I’m listening to David talk I just want to say, “Really? That’s how you say that?”

Stephanie, Evelyne, Camilo and I decided to meet up this morning to go to Cascais. Cascais is a beach town about 40 minutes outside of Lisbon that I’ve wanted to go to for a while. Camilo partied a little too hard last night and decided not to come. Evelyne was out partying until 4am, but she still came despite being a little hung over. I went to bed at midnight after going to institute last night and woke up feeling like a champ.

I loved Cascais for one reason – free bikes. I love to go bike riding (giving away my Utah bike that was given to me last year was actually kind of sad). Cascais “rents” bikes for free to anyone and they have an awesome bike path along the beach. It was so much fun. The bikes were surprisingly nice considering they are free city bikes. Before we rented them, I told the girls that people always speak to me in English even if I ask them to speak to me in Portuguese. The bike lady was no exception. I told her right away that I’m here studying Portuguese and that she could speak to me in Portuguese, but she continued talking to me in her English that I would define as “comprehensible” despite the fact that I was talking to her in Portuguese. I just started talking to her in English because I try to follow the “respond in the language being spoken to you” rule. She even talked to Evelyne and Stephanie in English even though it isn’t their native language and they both speak Portuguese very well. Eyelyne and I by our bikes. 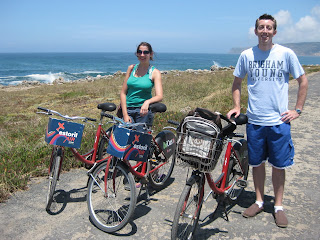 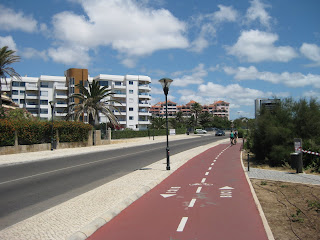 Once we got our bikes we hit the road and the weather was perfect. We had an awesome snack of fruit and cake that Stephanie brought along. Evelyne had heard that Americans don’t really eat fruit unless they’re from California. This led to my making frequent jokes like, “A plum, I’m never had one of these before,” or “wow, this is the first time I’ve had fruit in two years.” I’m a fan of David Sedaris and I particularly like two of his stories: one about the Dutch Santa Claus and one about Easter in France. Since I had a long bike ride with a Dutch girl and a French girl I decided to find out if these stories were really true. It turns out that the Dutch Santa Claus does live in Spain and arrives every year by boat and instead of the Easter Bunny, French children are given candy by a bell from Rome. I would like to discuss how ridiculous these traditions are, but unfortunately a flying sleigh, the North Pole and bunny might even be more ridiculous.

Stephanie said to do a swing dance move. I wasn't quite sure what to do and the 10 second timer didn't give me much time to decide. 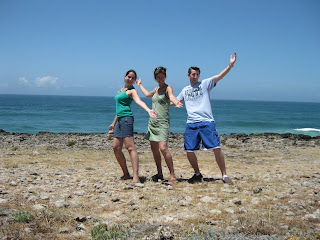 Thank you so much for the update. I'm grateful for your sense of humor and outlook on life. I have read a little of David Sedaris, and I must say the perspective of holiday traditions has always boggled my mind. ;P You're the greatest. Thanks for all the fun blogs!