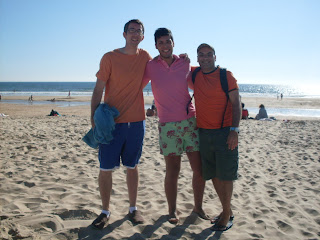 I have three roommates: Hugo (pronounced: OOO-goo), Paulo, and Maurice. Hugo and Paulo are from a Portuguese island called Madeira and Maurice is from Cameroon. I don’t see Maurice very much, but I see Hugo and Paulo rather frequently. When I first met Hugo and Paulo I didn’t realize that they were homosexual, but little hints started to pop up here and there: Paulo’s slightly feminine voice, Hugo’s love of theater, sharing a room that only has one bed in it, etc. As clues would start to emerge I’d discuss them with Ana during class which was really quite fun, but inconclusive. I’ve never seen them kiss or hold hands or even hug. However, I finally decided that they were gay.

Two weeks ago Hugo and I were chatting in the living room and he told me that he and Paulo were gay, but I wasn’t surprised because I’d already used my expert sleuthing skins to reach that conclusion on my own. Hugo has a twin brother who is also gay. I asked him when he found out that his brother was gay and he told me the following story. As a side note, Hugo is a very good actor and he told this story with a lot of great comedic timing so please try and image that. One day when Hugo was 18 or so he was out and about and someone that he didn’t know started talking to him on the street like they were old friends. The man mentioned something the indicated that Hugo was gay which was surprising since Hugo had never met this person before. Not only was Hugo confused, but the random man was confused that Hugo didn’t recognize him. He finally said to Hugo, “What’s the deal, Marcos?” and Hugo replied, “Marcos? I’m not Marcos. Marcos is my twin brother.” At this point I was laughing uncontrollably. I don’t know what went through the strangers mind at that moment when he realized his horrible mistake, but I can imagine it being a swear word. Hugo went home, talked to his brother, and they both admitted that they were homosexual and had a touching moment together. You know, the kind of moment that would happen on Full House or a Lifetime Original Movie. Side note: funny things are always funnier in a second language because the humor is magnified by pride in one’s self for understanding the joke.

A few weeks ago my friend Ashlee was in town. She had to catch an 8 am flight to the US and was just going to sleep in the airport. I told her to just stay at my place for the night and she slept in my bed and I slept on the living room couch. I had told all of my roommates that Ashlee would be staying the night, but I hadn’t told them that I would be sleeping on the couch. A little after midnight Hugo and Paulo walked into the pitch black living room without seeing me. I thought they might turn on the light which wouldn’t have bothered me, but I didn’t want them to feel bad for disturbing me. I decided to make my presence known and said, “Olá,” at which point Hugo took the Lord’s name in vain. Apparently my deep voice unexpectedly greeting someone in a dark room is cause for alarm.

Hugo and Paulo invite me to do all kinds of things, but I rarely go. A typical invitation usually goes something like this: At 10 pm, “Benji, do you want to get a Kebab with us?” “I’d love to, but I had dinner three hours ago.” I feel bad rejecting their offers so much, but it’s just bad timing. We planned to go to the beach together and I’m not much of a beach person, but I agreed to go. Their purpose in going to the beach was to get tan. As we were setting out our towels and lathering on sunscreen I rather politically incorrectly asked, “So, why do want to get a tan if you’re already brown?” and Paulo responded, “Because we want to be black!” and we all laughed.

Hugo and Paulo flew to London today and they come back the day after I leave so I won’t be seeing them again. I’m bummed that they’re gone and they’re bummed that they won’t get to meet my mom. They, more than anyone else, have taken care of me in Lisbon. They always asked me how I was doing and offered to help me all the time. When I asked Paulo where I could buy a DVD he printed out a map and gave me detailed instructions on how to get to the store. Honestly, I would have gotten lost without the map, but with Paulo’s help it was a cinch. Hugo speaks English really well, but when he found out I was here to learn Portuguese he only spoke to me in Portuguese and corrected me when I’d make a mistake which most people don’t do. I’m grateful for their kindness and their friendship. They made moving to a foreign city a lot easier for me.
Posted by Ben at 3:42 PM

The story of the twins discovering that they were both gay is hilarious. And those guys sound really cool.