Come What May and Love It 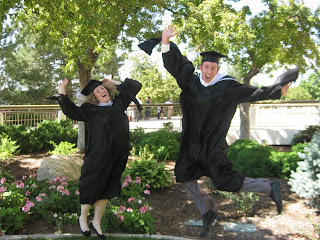 My mom and I arrived in Utah on Tuesday night and it’s good to be “home.” I had mentioned to her a few times how excited I was to go home always adding that I wasn’t quite sure where home was for me. While I was in Portugal I applied for a teaching job in Washington that I was confident I would get. On Thursday morning, just a few hours before graduation ceremonies, I got a phone call from the school district informing me that I didn’t get the job. They decided to hire someone that can teach French and Spanish. While I have lots of experience teaching, I can’t compete with someone that has more skills (although I’m pretty sure I have more skillz).

The timing of the news was not good. I was hoping to hear that I had gotten job so when everyone asked, “What are your plans now?” I could say, “I have dental benefits,” but instead I said, “I don’t know.” As my parents and I drove to commencement I lamented in disappointed frustration, “How did I let this happen?” You see, I’ve been applying for jobs for the last four months and was sure that I would have found something by the time I graduated. I just couldn’t believe that I’d become "one of those people” who get graduate degrees and then end up unemployed and living with their parents. It just wasn’t a good time to celebrate my graduation.

When I got to the Marriott Center and found the line for graduate students I ran into Erin Shaw who I had taught in the MTC years ago. She was graduating as well, had a great job lined up, and told me how excited she was to be able to go to the dentist again. I was happy for her and felt more like celebrating. I apologized to my parents for being such a grumpy bear and decided to just enjoy graduation. President Samuelson was the first speaker at commencement and he talked about how things will work out. They don’t always work out in the way or time that we expect, but things always work out. During his talk I reflected on my own life and felt the truthfulness of his words. I thought about my internship in Bolivia, living with a 71 year old lady in Mexico, my previous job teaching high school Spanish, deciding to go to grad school and my summer in Portugal. All of those things hadn’t been in my plans, had happened rather unexpectedly, and had been awesome. I decided that President Samuelson was right. My life has been so awesome and it’s only going to get better. I think Nephi was right we he said: “if it so be that the children of men keep the commandments of God he doth nourish them, and strengthen them, and provide means whereby they can accomplish the thing which he has commanded them…”

After feeling sorry for myself for the few hours before commencement I changed my attitude and decided that things will work out better than I could have imagined. I watched a video yesterday that helped me be even more optimistic about the future. It’s called Come What May and Love It. It’s only three and a half minutes long and you can watch it by clicking here. I don’t have a job, I don’t have dental coverage, I don’t have a bed, and all of my earthly possessions are currently in my car (please don’t steal my car right now), but I have hope for the future. Life is awesome and it's only going to get more awesome. Come what may, I’m gonna love it. 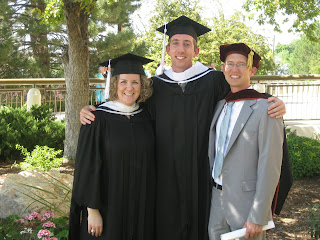 Quick funny story: I took Allison out for lunch at El Gallo Giro on Wednesday which I paid for. We then got ice cream cones at Macey’s that Allison bought. They were delicious and cost less than 50 cents apiece. Allison said, “Less than a buck! What a cheap date!” to which I responded, “I had to pay $12 for lunch. But I like this set up with the guy buying the meal and the girl buying dessert.” Hearing our conversation, the teenage boy working behind the counter said, “Girls should always give you dessert at the end of the date.” Since he’s a teenager from Utah the “dessert” he was referring to is probably a goodnight hug that last 6 to 8 seconds.
Posted by Ben at 12:20 PM

I really liked the whole post, but I think the dessert was my favorite part. :)

Yay! There are great things coming for you Ben! I'm so glad I saw you at graduation and got to sit next to you, you've been a great friend. One day you'll go to the dentist...

Benjamin, your dream job is obviously located in San Diego... maybe you should start applying there...

Becca, I think dessert is always your favorite part (the eating kind, not the hugging kind).
Erin, it was so cool to sit next to you. Such a great surprise!
Audrey, I would love to work in San Diego. It's probably my favorite US city. Let me know if you hear of any Spanish teaching jobs there.

Are you certified to teach Science or 2nd grade? We're still hiring!

Wait...YOU bought someone a lunch??

Amen about the job though. I am also one of THOSE people who have a degree and no dental plan. But you're 100% correct: God provides and life is never what we plan. It's so much better than that. "Consider the lilies of the field..."

In the mean time, here's a toast to toothpaste and flossing!

Dear Ben, I'm so lucky to have been mentioned briefly in your blog post. I now have 7,000 times more street cred than I did on August 14th. You're the wind beneath my teaching wings.

Dear Ben,
I am truly honored to be featured in one of your blog posts. I feel like my street cred is 7,000 points higher than it was on August 14th. You are the wind beneath my teaching wings.

Thanks, Dr. M, I've been told that I'm very wind-like. I'll happily give you all the street cred I can muster without giving you any street crud. You never know what that stuff is made of.