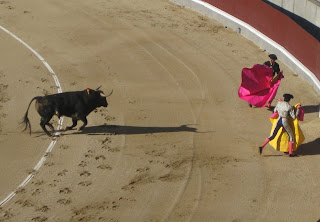 As a Spanish teacher I felt in my duty, nay, my obligation to attend a bullfight in Spain. Sevilla is the capital of bullfighting and while we were there I looked into attending a bullfight. Not only are they super-expensive to attend there, but there weren’t any fights during our time there. I wasn’t too disappointed and was easily consoled by the visiting the Museum of Bullfighting.

My mom and I are in Madrid now and we stopped by the bullfighting ring to see when the next fight was and there was one tonight. For €12.30 we got great seats in the shade. A nice Asian family from California sat next to us and after briefly discussing where we were from the dad looked at me and said, “So I take it you’re not a vegetarian?” I was grateful for the reinforcement of my funny Asian stereotype. As we were leaving the bullfight he said, “Headed out to get some stakes?” and I said, “You know it!” We got ice cream.

As part of the bullfight they have men come out on horses who stab the bulls with long sticks. Horses used to get gored all the time so now they wear a lot of protective padding. Each round the horses got pulverized by the bull which was especially sad because the horses were blindfolded (that way the horse won’t react to a bull running at it). One horse even got knocked over. This was my least favorite part of the show because I was so worried about the horse’s safety. During the show I realized how odd it was that I was worried about a horse when I didn’t really worry about the men fighting or the dying bull. The horses are just so darn loveable.

At the beginning of the show the men participating (I don’t know if they’re all considered matadors) did some warm ups with their capes which seemed similar to the drills sports teams do before games. They were all wearing brightly colored uniforms covered in fancy ornamentation with pants so tight you’d think they were the Jonas Brothers. The matador had a red cape, but all the other guys had pink ones. One of them was wearing a pink uniform and as I watched him holding his pink cape and twirling around on one foot with the other foot gracefully out to the side I couldn’t help but think that he looked a little gay. At that moment I remembered the comment that the Asian man had made and inspiration struck.

The idea I had was to write a story about a gay vegetarian matador. Of course he’s wildly famous and if it got out that he was a gay vegetarian he’d be ruined. I haven’t decided if it should be a drama or a comedy yet. If it ends up being a drama the plot will revolve around the importance of being yourself no matter what others think, sort of like High School Musical. I’d call it something like When the Steaks Are High. Jorge, the matador, is faced with a tough decision when a television show is going to tour his house. Does he show them his favorite part of his house, his organic vegetable garden, or does he hide from the truth like he’s done for so many years? The comedy would involve hilarious situations in which the matador would do a poor job of pretending to be someone he’s not, like The Parent Trap. I think When the Steaks Are High would be a good title for this one too. It would involve many hilarious situations. For example, Jorge is invited to an important state dinner and is served a steak. He must figure how to make everyone believe he ate the steak without actually eating it. Either way, it’s bound to be more popular than The Hunger Games. And the best part is the surprise ending when the reader learns why he’s a vegetarian.

I enjoyed the bullfight, but I don’t feel a need to go again and my mom will definitely not be going again. At the bullfight I also realized that I will probably reference this experience in every Spanish class that I ever teach so I’ll have to come up with some more exciting details.

Also, I thought of a joke as we rode the metro to the bullfight. What do you call someone who falls asleep during a bullfight? A bulldozer. 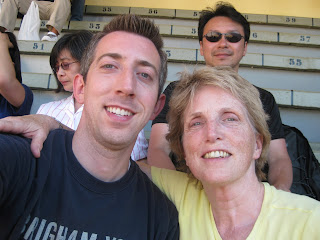 Ben, as always, you are a great story-teller, AND what a neat picture. I don't think I could have gone with you... your mom is pretty amazing!

I laughed, out loud, for at least 1 minute and 22 seconds at your joke. I'm going to share it with everyone I know. And then turn it in to Laffy Taffy with your name on it.

Ben, you should definitely write that story, the Steaks are High. And maybe even turn it into a musical! Haha, I can already think of some awesome songs.

Hm, according to the book 'Ferdinand', there are the banderilleros, then the picadores, AND then the matador. We read that book often to my son. But still cool you saw a real bullfight!