I Have A Cactus for A Neighbor 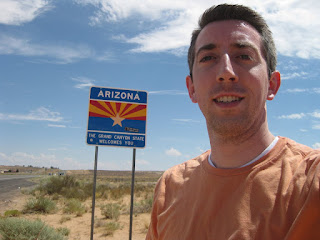 I made it to Arizona! My drive from Provo to Tucson was rather uneventful, but fun. I didn’t realize how little there is between those two cities. As I was driving through Sulphurdale, Utah I decided to call my friend Allison (not because she smells like sulfur). She didn’t answer, but called me back a short time later. I was driving through a mountainous area and she kept cutting in and out so I told her I’d call her back in few minutes when I had better service. I then lost service completely and when I get service again it said I was roaming. I didn’t get real service until I reached Flagstaff, AZ about five hours later. So when I said, “I’ll call you back in a few minutes,” I really meant “hours.”

When I crossed the border into Arizona I saw the scenery I had expect: rocks, sand, desert vegetation. Like this: 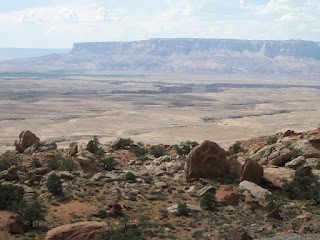 After driving for a while I went up this winding hill and when I got to the top I was surrounded by grass and trees. Apparently there’s a forest in northern Arizona. Who knew? I didn’t. 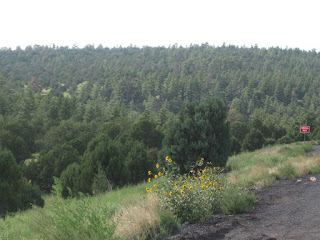 I got to my new house around 9:30 on Saturday night and met my new roommates. They're both cool and Mexican (those are usually synonymous to me). I had seen pictures of my house before I got there and it looked really, really small. And honestly, it is small, but much larger than it looked in the pictures. I really like it. I haven't gotten any furniture for my bedroom yet so it's just a mess of boxes and my super-comfortable cot. 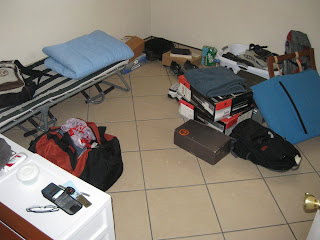 Tucson looks nothing like Washington, but I'm already liking it. And the coolest part is that I live across the street from a cactus. Here's the view from my front porch: 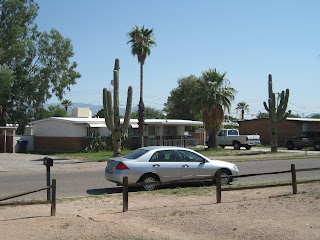 Based on advice from friends, I will not try to become friends with the cactus by hugging her (obviously she's a girl).
Posted by Ben at 10:00 PM

AHHHH, I love Tucson!! That last picture makes me sad that I'm not there.
I'll go take a shower now.

Your bedroom has tile in it? You need an area rug asap.

And, is that your "new" car in the picture? Lovely! I can't believe I didn't get a ride in it before you headed south. Dang it. Regret #2 of the day, all thanks to your blog.

Yes, that is my "new" car, Joleen. My biggest regret is not taking you shopping to pick out an area rug for me because I probably won't buy one now.