My blog has kind of fallen by the wayside recently and I blame my mom. She flew into Lisbon a week ago and we had a blast together and I had so much fun showing her around. My mom is great and she’s fun to be around. Funny things happen when we’re together, too. For example, halfway through class each morning we have a 30 minute break which consists of everyone buying coffee and eating pastries. Since my mom didn’t have anything to do in the morning I brought her to school to meet my friends. During the break I bought her a piece of cake and brought her over to the table that all my friends were sitting at. I said, “This is my mom,” and my mom said, “Hi, I’m Ginny, “ at which point she accidently let the cake slide off of her plate and onto the ground. I quickly gathered it up and cut off the part of the cake that had touch the ground so we could eat the rest. Actually, after picking it up none of us remembered which part had touched the ground so we may have eaten the ground side.

My mom is pretty spry for being 62 and my classmates were shocked when they found out her age. Someone said, “But she looks so much younger,” and I said, “She uses a lot of facial cream.” That’s not true, but it seemed like a good explanation.

My mom and I flew to Barcelona on Friday and while we were waiting in the security line I said, “Oh shoot! Our water bottles are full!” We didn’t waste any time and I quickly chugged down all my water. My mom chugged down hers, too just as a college sophomore would chug a beer at a frat party. I’ve never been to a frat party or seen a college sophomore chug a beer, but I can imagine that it is very similar to what my mom was doing. Her bottle was bigger than mine and she didn’t quite get it all down in one breath. She had chugged valiantly, but there was still a little left so I said, “just dump it in the trash can,” and she throw the whole bottle in. I immediately said, “Not the bottle! The water!” She retrieved her bottle from the trash can and dumped the water in.

My mom doesn’t speak Spanish at all so she just talks to people in English even when she knows that they don’t speak English. She doesn’t seem to realize that she really needs to dumb down how she talks when she speaks to people who know very little English. For example, last night we ate at a delicious restaurant in Córdoba in a building that was four hundred years old. Our waiter didn’t speak much English, but he was kind enough to show us around the building and point out the historic features. My mom started to explain that she had a friend in Tucson who lived in an adobe house and she was going to talk about the benefits of living in an adobe house, but the waiter cut her off and started talking about something else. I’m sure my mom was talking too fast and when she mentioned exotic places like Tucson that our waiter had probably never heard of he decided he was better off changing the subject.

Traveling with my mom has been great and I’m so glad she’s here. She’s glad I’m here, too because I can talk to people. 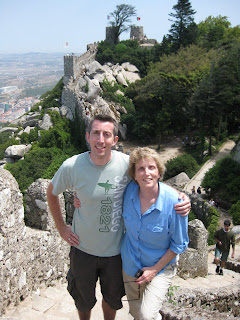 I love your mom! So Rad that she was able to make it out to visit you...I remember you telling me something about your dad being deathly afraid of international travel, is that why he didn't make it?

I LOVE that you likened your mother to a drunk college sophomore girl. Oh, the love of a son...

The whole bit about her speaking normal English to someone who doesn't makes me laugh because it's EXACTLY what my own mother would do.

Natalie, yes that's why my dad didn't come. Also, he's just not interested in seeing the world. Allison, from the short time I've spent with your parents I feel like our families are super-similar. Like when your dad gave us $40 for lunch.

It was so good having lunch with you both! I big kiss to your mom! :)